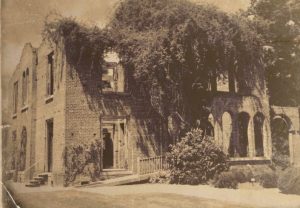 Three years after the Cherokee natives that occupied the area were sent on the Trail of Tears, Godfrey Barnsley bought at least 4,000 acres of Cherokee land.

Godfrey, a cotton broker, planned on creating a beautiful estate for the love of his life Julia Scarborough. They had wed on Christmas Eve in 1828 and Godfrey had amassed a fortune.

On Godfrey’s first visit after purchasing the land he met an old Cherokee man that still lived there. Godfrey befriended the old man and hired him to work for him and allowed him to continue living on the property.

Construction was moving smoothly until Godfrey told the old Cherokee that he planned on shearing off the bluff above the spring to build the mansion, known as the Woodlands. The old man became upset and explained to Godfrey that the land was sacred to the Cherokee and that the forefathers would be unforgiving if he destroyed it.

Godfrey ignored the old man’s protests clouded by his passion to create an estate for Julia. The old Cherokee man disappeared, never to be seen again.

Godfrey finished the construction of the Woodlands and the gardens, spending a good amount of his fortune. Away on business, Godfrey’s love Julia soon fell ill while at the Woodlands. It was not long after that Julia died from her illness in 1844. Paralyzed with grief Godfrey stopped construction on the estate.

Business began to suffer with the onset of the Civil War, Godfrey began to work day and night on his cotton business so that his family could continue to eat. During a business trip in Mobile Godfrey went to his first seance. During the seance he made contact with Julia who wished that he would complete the estate.

A friend of Godfrey’s, a Confederate Colonel, would take leave of the war to help Godfrey in the renewed construction. One day the Colonel shouted a warning of approaching northern soldeirs, but it was too late. Godfrey’s friend was shot by the oncoming troops who diminished the estate of it’s supplies. Mourning his friend, Godfrey buried him behind the manor.

Feverishly, Godfrey went back to work on the estate with Julia’s spirit as his guide. As construction continued Julia’s spirit would be seen frequently on the estate, especially in the gardens. Godfrey spared no expense and gave all his time to the completion of the estate.

The hard times of the civil war left the Barnsley’s in elegant poverty. Godfrey was reunited with Julia in 1873 when he died almost penniless.

Godfrey and Julia’s descendants continued to live at the Woodlands. However, living at the Woodlands was an expensive endeavor and money was always needed. Barnsley’s granddaughter, Addie, had a son, Preston, that was a prizefighter.

Preston would use his earnings to maintain the estate. Preston ruled the estate with an iron fist. He was known for an out of control temper, and it was believed that he suffered brain damage from his fights. Preston finally succumbed to insanity and his brother, Harry, had him institutionalized.

Preston believed that Harry was after control of the estate and escaped the institution. Preston made his way back to the Woodlands where he shot and killed his brother. Harry died in his mother’s arms in the front room of the Woodlands manor.

Preston was sent to prison and Addie continue to make out a living at the Woodlands. During her life there Addie said that she saw many ghosts, including Godfrey and Julia. She also said that she saw the Confedrate soldier that was killed there. And most heartbreaking for her, she would be visited by her murdered son Harry.

In the early 1900’s the estate fell into ruins, suffering a fire, and damage from intense storms. The property had become overgrown and unkempt. Prince Hubertus Fugger Babenhausen of Augsberg, Germany heard of the property and its history and bought it in 1989.

Believing that the property was cursed, two Cherokee chiefs were invited to the Woodlands to put the curse to rest. The Prince restored the Woodlands and the Barnsley gardens. Today it is a beautiful resort that welcomes visitors.

Others have reported the sounds of footsteps throughout the villas. Some have claimed that Julia will throw open the curtains, as she couldn’t stand the feeling of being closed in during life.