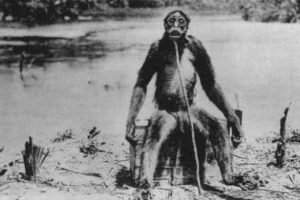 The reported discovery of the De Loys’ Ape by Swiss Zoologist Francois De Loys in 1920 is just one of many unknown primate claims made over the years. South American forest natives often claim encounters with large monkeys.

These elusive creatures have been known by many names for many centuries . Natives commonly referred to a “mono grande”, or king monkey, also known as “mono rey.” Pedro Cieza, a Spanish explorer claimed to have seen large apes referred to as “marimondas” in 1533; Dr. Edward Bancroft witnessed 5 ft apes referred to as “didi” in 1769; and Alexander von Humbolt recorded stories of “salvaje” or hairy ape men between 1799 and 1804.

These anecdotal sightings along with one lone picture have kept the controversy surrounding De Loys’ Ape alive for nearly 100 years.

Sighting of the De Loys’ Ape

Swiss geologist Francois De Loys and his crew were among the numerous Europeans taken to Venezuela by oil companies to prospect the vast oil reserves.

During the expedition, his group was ambushed by two threatening creatures that resembled apes. De Loys’ men shot one of the creatures while the other one escaped. Marveling at the unique appearance of the primate, they decided to take a photo of it.

The ape corpse was sat on a crate with its head propped using a stick placed under its chin. After the photo was taken, the creature was skinned in order to prepare the skeleton for transportation.

Unfortunately, the hardships of de Loys’ expedition resulted in the loss of all his equipment and specimen, including the creature’s remains. Only the photograph was saved, though it was enough to cause a sensation.

The apelike South American primate was given the scientific name “Ameranthropoides Loysi” by George Montandon in 1929, while Arthur Keith proposed that it be called “Ateles Loysi”.

Scientists claim that it is an unknown species of primate that walks bipedally in the jungles of South America. Its physical appearance resembles that of a monkey but lacks a tail like the apes.

Based on the single photograph of the creature that was saved during the expedition, it was determined that the primate was around 5 feet tall. This was established from the fact that the creature was set on a Standard Oil Company packing crate that was known to have a standard size. 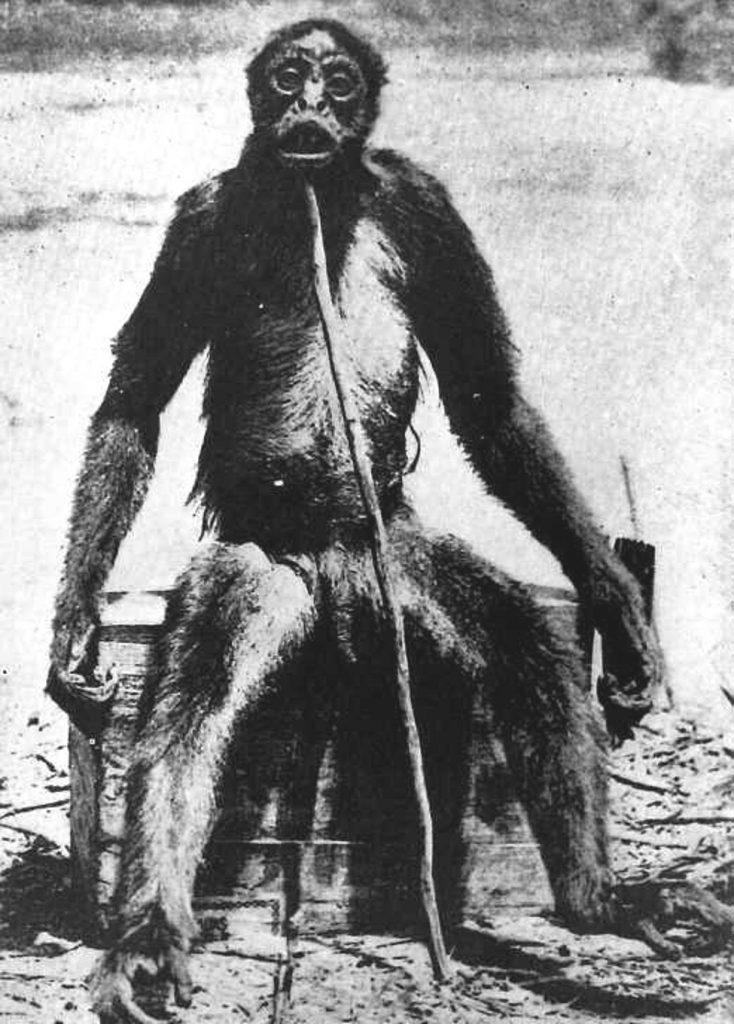 In addition, the creature was described as having a thick coat comprising long grayish-brown fur and an oval face with a developed forehead. There was also an indication of a triangular pale pigment patch on the forehead, and round ridges around the eye sockets.

It had a flat nose with flared nostrils and a strong jaw with thirty two teeth, which contradicts the typical thirty six in platyrrhine monkeys in South America. An examination of the creature revealed that it did not have a tail, which is an attribute of great apes as opposed to monkeys.

There were strong arguments against de Loys’ discovery, with individuals such as Sir Arthur Keith suggesting that the entire saga had been fabricated. While George Montandon, an anthropologist friend to de Loys thought that his friend had discovered an unknown South American species, Keith claimed that the primate was just a large Black spider monkey whose tail had been cut off.

Montandon promoted the existence of the De Loys’ Ape since he found it quite convenient in filling the missing pieces in his evolution theory called “Polygenism”. This evolution theory claimed that different human races had evolved autonomously from various species of ape.

The existence of an American anthropoid allowed Montandon to justify his theory by claiming that it could have evolved into the Native American race.

Keith, on the other hand, suspected De Loys of manipulating the creature for the camera. However, this explanation is doubtful since spider monkeys are significantly shorter with a height of about 3 feet, six inches when standing upright on the hind legs. The absence of a tail, less body hair, and a massive body also disagree with the features of these monkeys.

However, it is highly possible that the creature was a white-bellied spider monkey, scientifically known as “ Ateles belzebuth “. This assumption is based on Montandon’s estimation of the size of the crate on which the creature was seated: measures 16 inches instead of the usual 18-20 inches.

With just a photo to support the newly found species, De Loys’ Ape was never included in any analysis of primate evolution. There were other efforts to find the creature along Guyana’s Maruzuni River, where De Loys was attacked by the ferocious creatures.

However, Italian explorers in 1931 never found it though they claimed that there were eyewitnesses supporting its existence. American scientist, Phillip Herschkowitz, also retraced the route taken by De Loys and his crew and came to the conclusion that the mono grande was a hoax and a mythical exaggeration of the spider monkeys.

In 1951, a Frenchman called Roger Courteville revealed another photo of a mysterious ape from Rio Tarra in South America, but he was accused by skeptics of modifying the original photo to uphold the hoax.

Keith’s deductions that the discovery was a misidentification were also supported by a variety of other anthropologists and cryptozoologists such as Ivan Sanderson in the 1960s, after re-examination of the photo.

The primary question regarding this mysterious creature is whether De Loys’ Ape is indeed, a new species. Based on the lack of supporting evidence besides the single photo, the other two possibilities are that it was a deliberate hoax, or that it was an honest misidentification supported by trumped-up reporting.

The idea of a hoax could be true especially when argued from Montandon’s point of view, since he wanted to support his evolution theory to the scientific world. The integrity of De Loys can also be put to question, based on a letter written by Dr. Enrique Tejera in reaction to a story published about the ape.

In his letter, Dr. Tejera claimed to have been on the expeditions with de Loys, and that De Loys was a practical joker, and he had been given a white-bellied spider monkey, whose tail had been cut off. The idea to photograph it came to him after it died in 1919.

The truth of the matter is not known, but to this day, scientific interest in mono grande persists, though with a lot of skepticism.