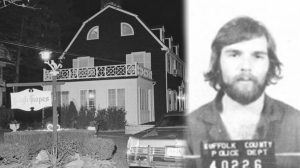 Amityville in New York was just an ordinary town but became famous in the 1970’s when Jay Anson published a book reportedly based on the true story of paranormal events that occurred there. The book which covered the paranormal experiences of the Lutz family would become a best seller and spawn a ten film series released between 1979 and 2011. The book later became a part of a controversy that questioned its truthfulness.

Although the story of “The Amityville Horror” is alleged to be based on true incidents, it is known to have been fictionalized and exaggerated. The real life facts and disturbing incidents are still mysteries that have no definite evidence.

The story begins with one November night in 1974, Ronald DeFeo Jr was known to have shot and killed 6 of his family members. This was later referred to as the Amityville murders. That was however just the beginning of the Amityville horror.

A man called George Lutz and his family moved into that house after thirteen months. Kathy Lutz who was George Lutz wife started to find the house creepy and after 28 days, the family shifted their residence. The family claimed to have witnessed a series of paranormal events.

Some of the disturbing events included the presence of swarms of flies in the cold winter weather. The wife claimed to have felt an embracing sensation by some unseen ghost or force. The discovery of an unknown room in the basement was also very scary. That room was later called the red room due to its red walls. Some areas of the dwelling had smells of perfume and there were some cold spots, which could not be explained. Some doors and windows were also damaged by something unseen and unknown.

There are many alleged facts associated with the Amityville horror but most have been proven false. One was that the house was on a Shinnecock Indian burial ground. However, the Shinnecock Indians lived nowhere near the town of Amityville.

Another was that owners of the house had to move down the street because they faced a number of supernatural incidents. However, they actually needed to move because the family grew in size and the home was small to accommodate the change. During the construction of the new home, the family moved into a small cottage only a few yards away until the construction finished.

Although the story of the Ronald DeFeo Jr killings at the Amityville House is true, the reasons behind it are not very clear. The paranormal activities relating to the murder may have been created to make the story more frightening and disturbing to read.

As damaging these falsehoods are to the creditably of the story they are nothing compared to the legal wrangling of the Lutz family. The Lutz family first contacted DeFeo’s attorney, William Weber to discuss linking their haunting story to a possible book deal about the murders.

The Lutz’s did not like the idea of sharing profits with DeFeo and abandoning this approach found author Jay Anson. Once a certain greed threshold was reached the law suits began to fly. Lutz and Weber filed suits against each other and every media outlet that dared to mention the haunting.

Notably the presiding judge over the lawsuit the Lutz’s had against Weber dismissed the suit finding it a work of fiction based on Weber’s suggestions. Weber would later state in People magazine that the story was largely created by the Lutz’s and himself over several bottles of wine.

Many people want to know if the Amityville house still exists today. It is still present, however it has been renovated and the address has also been changed. At the time of this writing there have been three families that have lived in the residence since the Lutz family moved out and none of the families have reported anything unusual. The current owners are Caroline and David D’Antonio. David made this humorous statement referring to gawkers that come to see the house.

“It is my dream house – our dream house,” says David. “There’s nothing the matter with it other than the outside people.”