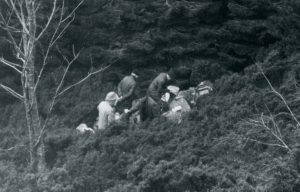 A university professor and his two daughters were hiking in the foothills of the north face of Mount Ulriken on the 29th November 1970, in an area known as the Isdalen Valley, Norway, when during the afternoon they came across the partially charred remains of a naked woman hidden among some rocks at a remote hiking trail, in an area popularly known as “Death Valley”, as it was a site where people committed suicide in medieval times, and, in the 1960s, some hikers had fallen to their deaths while trekking in the fog.

An autopsy concluded the woman had died from Fenemal and carbon-monoxide poisoning, and analysis of her blood showed she had consumed at least 50 sleeping pills. Her face had been burned and was unrecognizable, her neck was bruised, possibly by a blow, and her fingerprints had been sanded away. Her teeth indicated she had been to a dentist in the Far East, Central/Southern Europe or South America.

Police immediately launched a full-scale investigation, and Composite sketches, based on witness descriptions and analysis of her body, were published in Norwegian media and circulated in many countries via INTERPOL.

They found two suitcases belonging to the woman at an NSB railway station in Bergen, and in the lining of one, police discovered 500 Deutsche Mark. Among other things, they found clothing with all identifying labels removed, a lotion prescription with the doctor’s name and date removed, 130 Norwegian kroner, and silver spoons similar to the one found at the Isdalen Valley site.

Partial fingerprints were found on a pair of sunglasses and some diary entries. Police later concluded the entries were coded dates and places the woman had visited. An unusual dress was found as well and from that, police determined the woman had a somewhat provocative style of clothing, marked by Italian taste.

An Italian photographer’s postcard was found in the woman’s luggage, and when police spoke with him, he said he had given her a lift to Hotel Alexandra in Loen, and admitted that he had dinner with her.

The photographer said the woman told him she was from a small town north of Johannesburg, South Africa, and she had six months to see Norway’s most beautiful places. This line of inquiry went nowhere.

Police learned that the victim who was to become known as “Isdal Woman” had travelled around Norway and Europe with at least eight false passports. Eventually, authorities concluded she had committed suicide.

In 2016, a DNA profile was obtained from her teeth, and this as well as handwriting analysis suggested a European, and possibly French origin. In 2017, isotopic analysis of her teeth revealed that she probably spent her early childhood in central or eastern Europe, but spent her adolescence farther west.

People who had met the woman said she wore wigs and spoke French, German, English, and Dutch. She had stayed at several hotels in Bergen, and repeatedly changed rooms after checking in, telling hotel staff she was a travelling saleswoman and antiquities collector. At several places, she left a standing order of porridge with milk.

One witness said she overheard the woman talking to a man in a Bergen hotel. According to the witness, the woman said, “Ich komme bald” (German: “I am coming soon”).

The last hotel “Isdal Woman” stayed at was the Hotel Hordaheimen and staff told police she was good-looking and roughly 5 feet 4″ tall, with wide hips and small eyes. She appeared to be between 30 and 40 years old.

Another Hordaheimen guest told police the “Isdal Woman” smoked South State cigarettes (a Norwegian brand). Staff noted the woman kept mainly to her room, and seemed to be on guard. When she checked out of the Hordaheimen on 23 November, “Isdal Woman” paid her bill in cash and requested a taxi. Her whereabouts between then and 29 November (when her body was found) are unknown.

In 2005 a Bergen resident who had been 26 in 1970 told a local newspaper that after seeing the sketch circulated, he had suspected the dead woman was the woman he had seen five days before the body was found, when he was hiking on the hillside at Fløyen.

She was dressed lightly, in clothing more suited to the city rather than a hike, and was with two men wearing coats who looked “southern”. She seemed about to say something but they stopped her.

He went to someone he knew at the police to report this, but according to him the policeman with whom he spoke answered “Forget her, she was dispatched, the case will never be solved”, he followed the advice, waiting 32 years to tell the story publicly.

The case is still considered to be one of Norway’s most profound mysteries and been the subject of intense speculation over the years regarding the identity of the victim, the events leading up to her death and the cause of death. and public interest in the case remains significant, but after nearly 47 years, the Isdal woman’s identity remains unknown.

In 2016, NRK, the government owned and largest media organisation in Norway commissioned the American artist Stephen Missal to create six alternative sketches of the “Isdal Woman”, which were put before people who had seen her.