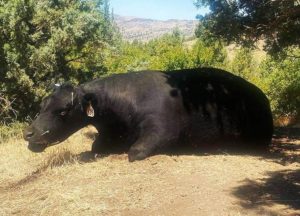 An unusual incident in the US state of Oregon left local authorities and farmers perplexed. Everything looked as if something suddenly attacked the crouching cow, cut out the internal organs, and at the same time the cow did not even have time to understand anything. She died in the position in which she sat.

Overall, this incident is similar to numerous mysterious cases of cattle mutilation. In the same Oregon in 2019, there was the same strange killing of bulls. However, there the bulls were found lying on the ground. A new mysterious incident occurred at the end of July 2020 at a ranch in the Fossil community.

A black farm cow was found sitting in a field. From the outside, it looked as if the cow had just sat down “on its knees” to rest.

However, when the farmer came closer, he saw that the cow was dead, she was sitting with her legs tucked under her, keeping her head straight and with her mouth parted.

“I have no logical explanation for this,” says rancher David Hunt.

The cow was discovered on 23 July. It was an expensive breeding animal, costing about $ 1,000. In appearance, the carcass seemed intact, but the examination revealed horrifying details – the external and internal genitals were cut from the cow’s body, and the tongue from the mouth was also missing.

When Hunt called County Deputy Sheriff Jeremiah Holmes, he examined the cow’s body and was also confused, since the wounds on the animal’s body did not at all look like traces of a predator attack.

On the cow’s body, he also found no marks from shots, injections, blows or burns, and samples in the laboratory showed the absence of poison. As a rule, aliens or satanic cults are suspected of such attacks on cows. However, this case is unique due to the unusual body position of the dead cow.