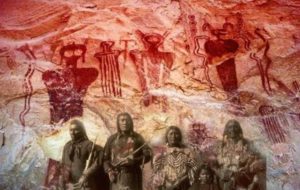 In an Aboriginal worldview, all things in the universe (including rocks, wood, dirt) are alive, and are intelligent.

Contact with intelligent extraterrestrial life in this worldview happens all the time, not only in Dreaming Stories, but in everyday life, with natural phenomena empirically linked to seasonal movements of celestial bodies, also defined in lore as indicators of communication from sky beings.

The most direct form of extra-terrestrial communication with earth is in seasonal indicators – like for example, when a crocodile appears in the Milky Way it is Autumn and Winter. At that time, the emu up there is upside down, and his rotation determines the breeding cycle of the emu on earth.

Death is the ultimate form of space travel for many Aboriginal cultures, for people whose spirit goes to the skycamp after the body dies. So really, Aboriginal people are the ultimate space explorers, and the ones who communicate with extra-terrestrial life daily through interaction with the land and the supernatural.

Western Scientists are unable to interact with extra-terrestrial life because of the limitations of what they accept as life and intelligence. You need to look at the history of western science here to find the source of this disparity in definitions.

The ancient Greek philosophers were the first to put forward the theory of “dead matter” such as rocks and wood and dirt. Before that, everybody understood the life in these things.

Modern science has discovered the tremendous energy that exists in these objects that were thought of as “lifeless”, but the Greek idea of the lifeless matter still persists in western ideologies, and this limits the directions western science can take.

The ancient Greek scientists also put forward the idea of animals and plants being unintelligent life-forms, thus separating humans from nature, and limiting the concept of intelligence to human thought.

This ignores the complex patterns and dynamics in geology, astronomy, biology etc – all complex adaptive systems that adapt and recreate aspects of the universe, and all of which satisfy even the western definition of intelligence, in that they are self-organising.

Aboriginal knowledge has a lot to offer in the western search for extra-terrestrial intelligence, but this mostly involves a shift in perspectives and concepts of what constitutes “alien” life.

It is even being acknowledged that much of the contemporary knowledge and technology attributed to western development has actually been stolen from or created through dialogue with Indigenous peoples.

These dialogical histories have been silenced and omitted in western history to date, but their rediscovery now represents a precedent for the enormous creativity and possibilities of interface research and education.

The very concept of “alien” is a western construct as well. It is part of the “othering” process through which westerners define themselves by creating an opposite, fascinating, terrifying monster that can be viewed, examined and defined as an opposing construct.

Aboriginal people and other ethnic groups are often viewed this way in mainstream culture – creating an “other”, an alien, to help westerners define themselves. For example, how can you define yourself as “white” unless you have other people to define as “black”?

This quest for self-definition has been the purpose of the creation of UFO and ET myths in popular culture. Westerners are unable to define themselves as human unless they have a non-human “other” to compare themselves to.

The western quest to answer the question, “Who are we and why are we here?” is the driving force behind the creation of fictional aliens and also the search for “extraterrestrial intelligence”.

As Aboriginal people, we already know who we are and why we are here, and so our quests and our interactions with the universe are different. Our definitions of what constitutes life and intelligence, and other aspects of our complex cosmology, have a lot to offer western science in the future. We only need to move beyond common conceptions of our cosmology as “myth”.