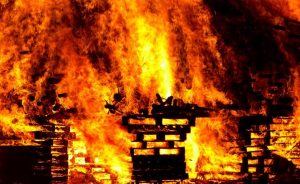 Over fifty fires of mysterious origin posed a serious problem to investigators. Although the conflagrations weren’t caused by chemicals, a boy was accused of arson.

In 1959, the tenant house where the torment began was occupied by Calvin Tuck, wife Willie Bell and their six small children, ranging in age from three months to nine years old. The family experienced a series of fires that had gutted the building.

All four rooms were ruined by smoke, which also destroyed most of their personal belongings. All, except for one fire started near the ceiling, the other in a mattress and none on the floor. The flames were described as bluish-red in color.

The house had no electricity and had a metal roof. Fire officials and law enforcement would become involved. The only logical explanation was arson which authorities tried to prove.

The fires began about 8:30 a.m. on August 25. The house caught fire three times and the next morning, there were flames, again, twice. It wasn’t until a dozen fires broke out that the Talladega Fire Department was called.

Fireman Glover Williams answered and thought the Tuck’s story about how the fires were starting was so bizarre that he asked Captain Joiner to come to the scene.

News of the mysterious fires made local newspaper headlines and spread through the town. Within hours, over two hundred people gathered to watch for fires. Many stayed through the night with buckets of water in case a new blaze started.

Talladega County Road Commissioner Leslie Hutto and local contractor Ortis Horton visited the house on August 27 and saw fires start about every fifteen minutes. They could not explain how they started.

When the Tuck family finally moved out that day, they were homeless, destitute and had no insurance on the house, so they moved into a nearby tenant house, but four more fires started.

The Tucks left the second tenant house to move in with brother-in-law Darnell Suttle. Five fires began the first day. The eerie incidents continued and Sutton finally asked the Tucks to leave. They moved in with Calvin’s father.

After there were more mysterious fires at the elder Tuck’s home, Calvin decided to see a Voodoo doctor who told him there was a hex on him and his family, gave him a spell and sold him ingredients to break it.

The Tucks moved to Anniston, a town about twenty miles from Talladega, into friend Troy Caldwell’s home. The fires continued.

There was no evidence to suggest arson. No chemicals were used to ignite the fires. The accused arsonist was nine year old Calvin Jr. who admitted that he played with matches. Two younger family members said he started the fires.

If the boy set the fires, how could he reach objects near the ceiling? Craven said he didn’t believe the boy’s confession and that the enigma of the fires wasn’t solved. The case was to remain open until a logical explanation could be found.

Parapsychologists, in more recent times, have theorized that a poltergeist could have started the fires. Poltergeist activity is a manifestation of PK, psychokinesis, the ability of the mind to affect matter.

he activity happens only in the presence of the human agent. Calvin Jr. was outside of the house and his father was absent when some of the fires started. Although Willie Bell was present during most of the conflagrations, she wasn’t home on the last day of the incidents.

An entity agent, most likely, is the most logical culprit. According to survival theory, a part of the human survives death of the physical body; therefore, PK can be exhibited.

Generally, HAPs aren’t limited to one type of activity, although rare, some have caused fires; however there were other manifestations. EAPs have been known to exhibit only one antic such as drumming and rock throwing, in addition to starting fires.