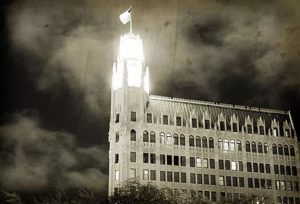 Named for the young woman they call the Yellow Rose of Texas, the Emily Morgan Hotel holds more than the spirit of its namesake. Especially on the 9th floor…

The Emily Morgan Hotel is opposite the Alamo, perhaps San Antonio’s most famous historical destination. The structure was built in 1924, as the Medical Arts Building, and has an ornate Gothic Revival style, complete with gargoyles advertising the ailments that were treated here.

Did all the patients leave alive? Did some remain behind in spirit, if not in body?

The hotel invites you to get into the spirit of things with a Psychic Happy Hour in the bar/restaurant every Thursday, offering free palm readings and live music. If you tell the staff that you are interested in the haunted aspect of the hotel they will endeavor to locate you on one of the floors with a reputation for unregistered guests.

Guests have reported a wine bottle sliding off the table, and the toilet seat being slammed up and down in one of the rooms on the ninth floor. Noises come from other rooms, not all of which have registered guests.

One report comes from someone staying on the 11th floor, who heard a something, a gurney or cart, rattling past the door at an odd hour. Opening the door revealed an empty hallway.

Other guests describe objects that moved overnight, or disappeared completely from the room. 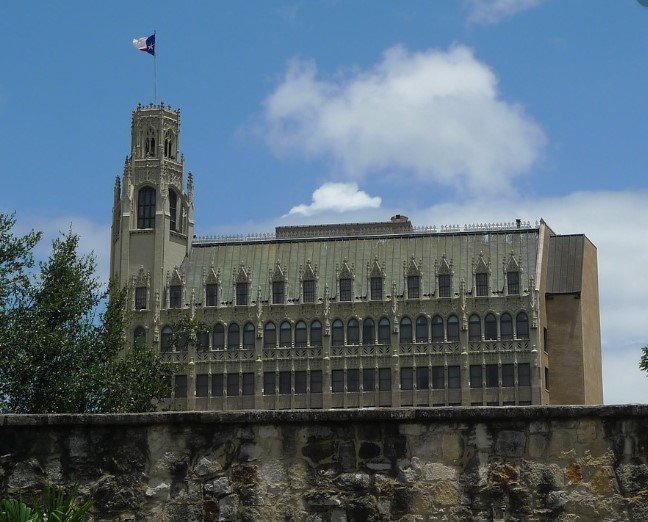 The same person reports seeing a female figure in a hospital gown, weeping and distraught. The figure was seen on two occasions and moved along a hallway and into a room on the 11th floor on the second sighting. On the third floor a guest was woken up by the sound of humming, and saw a young girl sitting on the bed. The girl asked her if she wanted to sing.

The following night the guest was woken up again, this time feeling like someone was lying next to her, pushing against her. On each occasion the room had turned cold. Another third floor guest heard a female voice singing from somewhere in the room. It woke her son up too.

Empty elevators that rise and fall

All elevators develop odd faults at some point, but do they make phone calls when empty, or persistently go from the 6th to 7th floor and back again. Or insist on going past the floor you have pressed the button to stop on. Or inexplicably carry you to the basement and then refuse to move.

The basement in the Emily Morgan Hotel was once used as a morgue. The 12th floor was the operating floor and the 7th and 8th floors are supposed to be quite well populated, in their own ghostly fashion.

Ghosts of the Alamo

Some of the rooms overlook the Alamo, and there have been reports of ghostly figures being seen in the grounds at night. During the Battle of the Alamo about 500 Mexican soldiers and 189 Texans were killed, between February 23rd and March 6th 1863.

General Santa Anna ordered the bodies of Texans to be piled up and burnt, including Jim Bowie and Davy Crockett.

Do they still walk there, unsatisfied with their end?