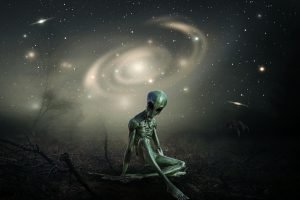 Recently, scientists recently announced plans to send a radio message containing information about the location of the Earth into deep space, in the hope that one day it will be received and understood by an alien civilization.

Now, a separate study has estimated how long it might take to actually make contact with aliens.

The paper is “The Number of Possible CETIs within Our Galaxy and the Communication Probability among These CETIs.” The authors are Wenjie Song and He Gao, both from the Department of Astronomy at Beijing Normal University. The paper is published in The Astrophysical Journal.

“As the only advanced intelligent civilization on the Earth, one of the most puzzling questions for humans is whether our existence is unique,” the authors state.

“There have been many studies on extraterrestrial civilization in the past few decades.” There certainly have been, even though it’s difficult to study something we’re not even sure exists. But that doesn’t stop us.

Over the past few decades, there have been many studies of extraterrestrial civilization.

According to one published in 2020 by researchers at the University of Nottingham, there may be 36 interacting extraterrestrial intelligent civilizations (CETIs) in the Milky Way.

This figure comes from calculations that include galactic star formation histories and the likelihood that stars host terrestrial planets in their habitable zones.

The paper stated that “[T]he subject of extraterrestrial intelligent and communicative civilisations will remain entirely in the domain of hypothesis until any positive detection is made”.

But the authors also stressed that it was still possible to produce models for “plausible estimates of the occurrence rate of such civilisations”.

A new article by researchers from Beijing Normal University builds on a previous study. Scientists considered the situation in two ways: firstly, how many terrestrial planets are habitable and how often life on these planets turns into CETI, and secondly, at what stage in the evolution of the parent star CETI can be born. The researchers gave each of these parameters a variable in their calculations.

Song and Gao ran a series of simulation scenarios using different values ​​of these variables and came up with an optimistic and a pessimistic forecast.

An optimistic forecast showed that it would take about 2,000 years to communicate with aliens. According to a pessimistic forecast, the probability that any single terrestrial planet will host CETI drops to a negligible percentage, and it may take about 400 thousand years to establish contact.

However, this is still more than three times the CETI that was projected in the University of Nottingham 2020 paper.

“It has been suggested that the lifespan of civilizations is most likely self-limiting (known as the Doomsday Argument) due to many potential disturbances such as population problems, nuclear annihilation, sudden climate change, comets, environmental changes, etc. » , the researchers wrote.

If the doomsday argument is correct, in some pessimistic situations, people may not receive any signals from other CETIs until extinction. It is also possible that no two CETIs in the Milky Way have ever been able to communicate with each other.

A woman filmed how invisible force pushed a frightened dog