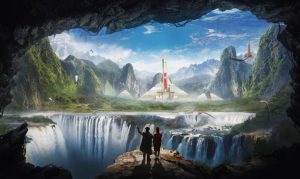 One of the most fascinating ideas brought forward from ancient times is the concept of a hidden world existing underneath the surface of the Earth. Agartha (also referred to as Agharti, Agartta or Agarttha) is arguably the most popular version of this type of legend, being mentioned in one form or another by several different ancient societies throughout history.

There are a plethora of oral traditions and popular legends found throughout several countries detailing the existence of an underground civilization of beings who possess supernatural intelligence and significant spiritual power. These subterranean people are commonly believed to be the inhabitants of Agartha.

Agartha is believed to be an underground kingdom located beneath the continent of Asia and interlinked to all of the other continents of the world by way of a vast network of tunnels. These tunnels are said to have been constructed partially by natural forces and partially by the inhabitants of Agartha.

One of the more intriguing points about this network of underground passageways is that there are allegedly several entrances into the Kingdom of Agartha from the surface of the Earth, including the Mammoth Cave in Kentucky, the base of the Great Pyramid of Giza, Manaus in Brazil, and the North and South Poles.

The exact locations of these underground passages are considered to be carefully guarded secrets, with only a handful of high initiates having any concrete knowledge of their whereabouts. According to the legend, this massive labyrinth of tunnels also doubles as a vast communication network, with some of the various entrances representing what are known as “planetary grid points”–energy hubs where intercontinental data transmission can take place.

The legend of Agartha finds its roots in what is known as the “Hollow Earth Theory”–a premise asserting that the Earth is actually hollow, and that there is an interior sphere within the Earth that contains a centralized Sun.

According to the Hollow Earth Theory, this subterranean environment houses several civilizations that are more spiritually and technologically advanced than their surface-dwelling counterparts.

In fact, many Hollow Earth adherents believe that UFOs are not extraterrestrial, but instead have been manufactured by these beings located in the interior of the Earth. Agartha is considered to be the most prominent society of the interior Earth, and is believed to reside in the Earth’s core.

According to the legend, Agartha’s capital city is known as Shamballa (also Shangri-La or Shambalah), and is commonly portrayed in several ancient cultures as being a mythical paradise. Shamballa is referred to by a number of different titles including the Land of Radiant Spirits, the Forbidden Land, the Land of Living Fire, the Land of White Waters, the Land of Wonders and the Land of the Living Gods.

Some ancient legends consider Shamballa to be connected to the original Garden of Eden. The Tibetans believe that Shamballa is an epicenter for ancient knowledge and enlightenment, but they also believe that Shamballa’s inhabitants possess advanced scientific technology that surpasses that which is currently known by those who live on the surface of the planet.

Some legends claim that the lost technology of Atlantis is present in this mysterious underworld, while others postulate that the Mayans actually moved into this subterranean civilization, a theory offered to explain their mysterious disappearance.

Author Brad Steiger penned an article entitled “The Hollow Earth: Myth or Reality”, in which he shared a popular legend regarding “the Old Ones”, an ancient race of hominids that inhabited the surface of the Earth millions of years ago, but subsequently moved underground. He claimed that the Old Ones were “scientifically advanced” and “immensely intelligent”, as well as “extremely long-lived”.

It is believed that this mythical civilization populates Agartha and that they generally remain aloof from the affairs of surface dwellers, but according to Steiger, they will appear every now and then in order to offer “constructive criticism”. Steiger also mentioned that the Old Ones will “often kidnap human children to tutor and rear as their own.”

Nineteenth-century French alchemist, spiritual teacher and philosopher Alexandre Saint-Yves d’Alveydre was a staunch believer in this underworld race of superior beings, and he even claimed to receive telepathic transmissions from certain inhabitants of Argatha.

Saint-Yves asserted that all of the wisdom and wealth of Agartha will be made available to mankind “when Christianity lives up to the commandments which were once drafted by Moses and Jesus”, or in other words “when the Anarchy which exists in our world is replaced by the Synarchy.” Saint-Yves also referred to the subterranean inhabitants of Agartha as “the ascended masters”, a title highlighting their spiritual superiority.

Ancient Buddhist philosophy also makes mention of Agartha, claiming that the society originated when a holy man led a tribe into the caverns of the underworld. Buddhist theory contends that there is a race of underground supermen and superwomen that possess knowledge and intellectual insight far above what is common to human beings.

According to their legend, these superior entities occasionally surface to investigate the progress of the human race. Buddhist myth also suggests that these underworld societies actually contain millions of inhabitants across several subterranean cities.

It is also believed that the Dalai Lama of Tibet is the terrestrial representative of the King of this underground society, and that he receives his messages via the planetary grid points that connect Agartha with Tibet.

Several Native American cultural traditions also claim that the predecessors of the human race came from beneath the Earth. Pueblo Indian tradition claims that their gods originated from within the Earth, and that this interior world is supposedly connected to the surface dwellers by way of a large hole in the North.

These assertions are not particular to the Native Americans either; the Egyptians, Chinese and Eskimos all have ancient writings that describe a great opening in the North, as well as a race of people that live under the surface of the Earth. All of these various legends also claim that their ancestors originated from a mystical paradise located within the Earth’s interior.

There are a handful of modern scholars that believe there are two primary openings leading to Agartha, and that these openings are accessible from the North and South Poles at 84.4 degrees North and South latitude.

Although modern science largely dismisses these claims as well as others related to the existence of Agartha, the enigma and secrecy surrounding this ancient kingdom will continue to enchant and inspire those who enjoy exploring the mystery of unknown worlds.