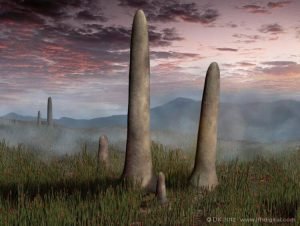 About 420 million years ago, the largest objects on Earth were not trees or even animals. In the Paleozoic era, strange organisms dominated the land, which are known in the scientific community as prototaxites.

They looked like elongated cones about 8 meters high, and invertebrate creatures built houses inside them. Judging by the fossilized remains, algae grew on the surface of these mysterious objects.

For many years, scientists could not attribute prototaxites to either trees or animals. But then they found evidence that these are huge mushrooms. In this article, we invite you to learn more about these prehistoric giants.

You will see that several thousand years ago our planet looked like the scenery of science fiction films.

For the first time, the fossilized remains of prototaxites were found in 1843, during the exploration of coal deposits in the Canadian province of Quebec. For some time, the mysterious objects were kept in the museum, and only in 1859 they were studied by the Scottish botanist John Dawson.

At first, he viewed the remains as the long-term ancestors of conifers. He described these formations as smooth trunks without branches, with individual particles of mushroom mycelium sprouting in them.

For many years the fossils were thought to be rotten wood, but then William Carruthers suggested that prototaxites were ancient algae. After him, Briton Arthur Church (Arthur Church) suggested that scientists are dealing with fungi, but his scientific work was ignored and the scientific community continued to consider prototaxites as aquatic plants.

And only at the beginning of the 21st century, the botanist Francis Hueber convinced everyone that they were dealing with mushrooms. While studying the fossils through a microscope, scientists found thalli in them – the so-called bodies that make up some algae and fungi.

While studying the fossils of giant mushrooms, scientists discovered that stripes are visible on their cut – they look like annual tree rings ( mentioned in this article ), by which you can find out their age.

However, unlike the rings on wood, they are often fused together in prototaxites. It was during their study that scientists discovered long and branching tubular cell structures, almost the same as those of mushroom mycelium. It is impossible to find out the age of ancient mushrooms from these rings.

In ancient times, mushrooms were the size of a house

Based on the fossils, the giant prototaxite mushrooms could stand up to 8 meters tall. At the same time, their average diameter was 1.3 meters. They are often depicted as long, smooth-surfaced cones that grow near water.

This must be how they grew, because scientists have reason to think that prototaxite fungi have something in common with algae. 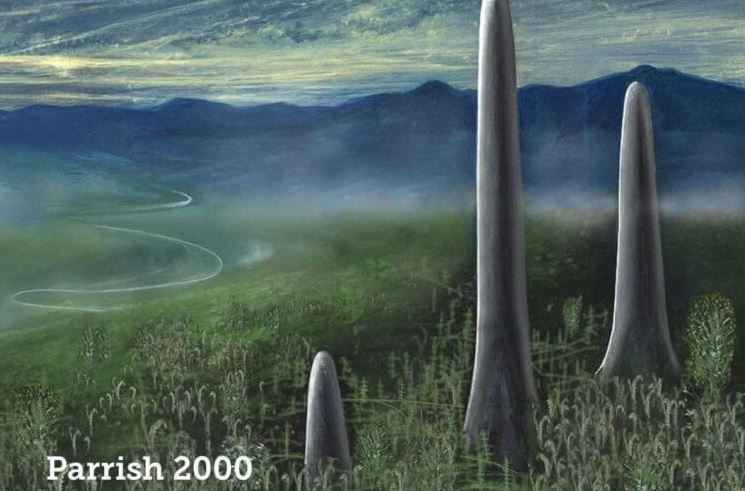 Huge mushrooms of antiquity may be relatives of algae

There is a hypothesis that prototaxites are not pure fungi – perhaps they are a hybrid of algae and fungi. In 2010, a group of scientists led by Linda Graham suggested that the cone-shaped formations arose as a result of twisting the mycelium of fungi, cyanobacteria and plants under the influence of wind. This is a very interesting hypothesis that may turn out to be true.

Whatever the giant prototaxites are, in the Paleozoic era they dominated our planet. In those days, plants already existed, but they were no more than half a meter high, covered wet lowlands and did not have a vascular system.

Thus, the giant prototaxites were taller and more powerful than them, thanks to which they spread a branching semblance of mycelium underground and sucked in nutrient organic matter.

Scientists believe that if it were not for the giant prototaxites, the current plants and animals would not exist in the world. Over the years, prototaxites have released substances into the environment to soften the soil – it is believed that over time they could even break down rocks.

Thanks to this long, but important process for the history of the Earth, vascular plants arose on our planet. And after that, complex species of organisms appeared on it.

Giant mushrooms disappeared due to plants

However, by helping the plants grow, the ancient mushrooms have dug their own grave. They dominated the Earth for about 70 million years, but then disappeared. One version says that the mushrooms were eaten by animals – they liked them so much that they could not recover.

According to another version, giant mushrooms lost the battle for water, food and space – the plants were stronger than them.

Mushrooms also exist today, but they are not as big as they used to be. But they still play a very important role – some scientists believe that they can save us from many diseases.

Discover the Meaning of Your Name Using Vedic Numerology