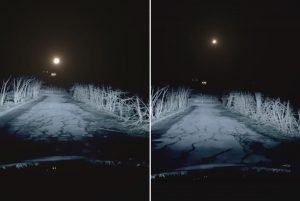 Ivan, a resident of Kerch, Crimea, posted on social networks a video that he recorded on his mobile phone, claiming that he had been watching an unusual mysterious ball glowing in the sky for several minutes.

However, after the start of shooting, the ball abruptly disappeared, rushing up. As if a object noticed the car and decided to hide. The man suggests that it could be a UFO.

According to him, other people who were nearby saw this phenomenon in the area of ​​the local Seaside Park.

Some netizens say they also saw an incomprehensible bright light in the area, but did not attach much importance to this. Others suggested that it could be ball lightning.

“It could well be ball lightning, because this phenomenon and their behavior have not yet been properly studied. If you watch a video with them, you can see a great similarity of what you saw in the video with ball lightning, ”said Evgeny Ryabkov.

Ball lightning is an unexplained phenomenon described as luminescent, spherical objects that vary from pea-sized to several meters in diameter. Though usually associated with thunderstorms, the observed phenomenon is reported to last considerably longer than the split-second flash of a lightning bolt.