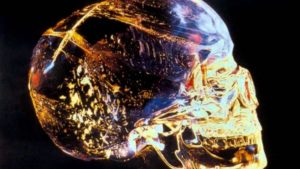 When you think of crystal skulls, they might conjure up images of an Indiana Jones movie, but in many ways, these quartz creations are just as exciting and intriguing as an adventure film.

What Are Crystal Skulls?

Crystal skulls are models of human skulls carved out of quartz crystal or jade. They can range in size from small, palm-sized versions to large life-sized skulls.

Crystal skulls are used for a variety of things. They may be included in rituals or ceremonies, energy work or prayer. They are also used for divination and to enhance intuitive and psychic abilities. In many ways they are like crystal balls, but some even have their own “personalities” and communicate telepathically.

Whether you find them fascinating or creepy and disturbing, there’s no denying that they are unusual and unique.

Crystal skulls not only look mysterious, they also have a mysterious history. Although associated with the Mayans and Mesoamerican cultures, there is constant debate over their true origins.

Some people speculate that alien or extraterrestrial races placed crystal skulls here. Still, others assume that they are remains from lost civilizations like Atlantis and Lemuria. And then of course, there are skeptics who claim that these objects are nothing more than clever hoaxes.

Regardless of their true origins, these skulls do seem to have magical properties. One of the most famous crystal skulls is the Mitchell-Hedges crystal skull, discovered in the late 1920s. Aside from being a rare skull with a moveable jawbone, it has a host of anomalies. Tests found that it was carved without metal tools and even without considering the axis in the quartz—unheard of crystallography. Working with the axis is critical to avoid fracturing or breakage.

Aside from its construction, this skull (along with others) has also been known to change color, glow, emit odors and even cause physical sensations like hot and cold spots.

People who work with crystal skulls also notice changes in their vibrational frequencies. Many receive intuitive and psychic messages, while others experience healing or a sense of peace and well-being. In most cases, anyone who comes into contact with a crystal skull rarely leaves without encountering something.

Although the famous crystal skulls are off limits, we still have access to smaller, personal versions through metaphysical and crystal shops. If crystal skulls resonate with you, try exploring their mystery and magic for yourself.

Occult And The Paranormal: Do Supernatural Occurrences Exist?