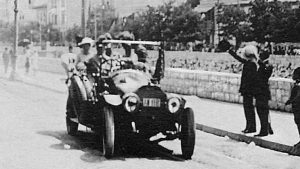 Can objects and people be cursed or hexed? Reality or merely coincidence? Is there scientific validity to this these? Are there any theories?

This is the first article in a series about omens, curses and hexes. The paranormal events in this article deal with cursed objects. Future ones will be about omens and curses involving individuals and families.

According to some theories of physics, matter is not destroyed. It can appear in different forms, like water. It is ice in a solid state, liquid in the liquid one and steam in the gaseous state. The matter is energy and energy cannot be destroyed in any way.

Could it be that objects have been imprinted with energy, which is unleashed later in the form of tragedy?

Could it be that the subsequent owners of the objects subconsciously believe they cursed, and, like the self fulfilling prophecy, bring the tragedy upon themselves on this level?

Or, what makes more sense, scientifically and psychologically, a mixture of both?

We have found two documented cases of “cursed” cars.

James Dean was a rising movie idol of the 1950s when his life ended in a car accident. He enjoyed fast cars and racing. He saw a silver Porsche Spyder fell in love with it and bought it, nicknaming it “Little Bastard.” He planned to race the car at Salinas on October 1st, 1955.

Others felt differently. They got bad vibes from it. Actress Ursula Andress and actor Nick Adams expressed their reservations about the Porsche. Dean’s reply to Adams was to say he was meant to die in a speeding car. George Barris said the Spyder gave him a sense of foreboding. Actor Sir Alec Guiness said Dean should get rid of the car. Dean’s uncle, Charlie Nolan, warned him about the car shortly before the actor was going to leave for Salinas.

September 30th, 1955: Dean drove to Salinas, with his mechanic, Rolf Wuetherich. Dean liked to drive fast. Following farther behind them, in a station wagon, were actor Bill Hickman and photographer Stan Roth.

Dean and Wuetherich stopped at Blackwell Corner and talked with Lance Reventlow, a fellow racer while they waited for the others to meet them. As Dean and his party were driving towards Bakersfield, Donald Turnipseed was driving home from college. They would meet at the intersection of routes 466 and 41.

Turnipseed, moving slowly, was going to make a left-hand turn onto 41. He saw the Porsche speeding toward him and could not decide whether to try to beat the car or swerve into the eastbound lane. He panicked and slammed on the brakes. It was too late. The cars collided. Dean was killed. 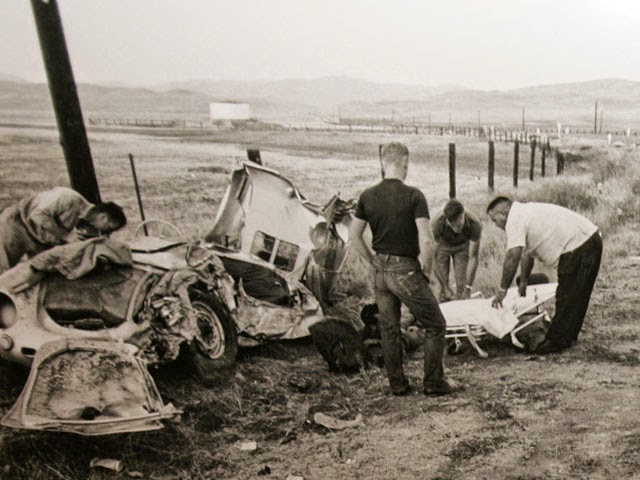 George Barris bought the wreckage of the Spyder. It was a rare car and he wanted its components. Later, he said he regretted this because tragedy followed the wreckage and its parts.

When the wreckage was unloaded at Barris’ garage, the car fell on one of his mechanics breaking his legs.

When a teenager tried to steal the car’s steering wheel, he was badly cut by a piece of metal. Another was hurt while trying to steal some upholstery.

Two physicians bought some of the car’s components which were installed before a race they would be in at the Pomona Fair Grounds. They were installed in their cars before the race. McHenry was killed. His car went out of control and hit a tree. Eschrid was seriously injured when his car rolled over.

Barris sold the two undamaged racing tires to a car enthusiast. He was reluctant to sell them, but the man was insistent.

Several days later, the buyer called, telling Barris that he had gone off the road, nearly wrecking his car when both tires blew at the same time. They were examined. No faults or defects were found. The car was put into storage.

Barris was approached by the California Highway Patrol that wanted to use the car in a traveling safety exhibit. He donated it to the patrol after welding the pieces of the wreckage together so it wouldn’t fall apart.

When the car was on display at a Sacramento high school, it fell and broke a student’s hip.

George Barkuis was transporting the car to Salinas on a flatbed truck. He lost control of the truck, was thrown out of that cab and killed when the Porsche crashed on top of him.

When the car was being transported by a truck, near Oakland, it fell off and caused an accident.

A truck carrying the Porsche was parked on an Oregon hill when the emergency brake slipped. The car crashed though a store’s window.

The Spyder was displayed in New Orleans when it mysteriously shattered into eleven pieces.

1960: the car was displayed in Miami, Florida, then crated and shipped back to Barris in Los Angeles. The Porsche never arrived. It is not known where it is.

June 28, 1914, Sarajevo: Archduke Francis Ferdinand and his wife, Archduchess, Sophie were killed by an assassin’s bullet, while riding in a red, six seat, open touring car, triggering World War I.

The car’s next owner was General Portiorek, who suffered an embarrassing military defeat and was summoned to Vienna where he was humiliated. He suffered mental problems and died in an insane asylum.

The next owner was an Army Captain. While he was driving the car, two peasants walked out on the road in front of him. He swerved, but hit them and crashed into a tree. All were killed.

The governor of newly created Yugoslavia acquired the car. He restored it, but was in four accidents with the car. He lost his arm in one of the mishaps and decided the car was bad luck. His friend, Dr. Srikis, thought this notion was silly and bought the car. Six months later, he was killed when the car overturned.

Both sources agree the subsequent owners. Next was a Swiss race driver who was killed when he crashed against a stone wall and was thrown out of the vehicle. A wealthy farmer bought the car. It would not start so he hitched it to a wagon to tow it. The car started and fell on the farmer, killing him.

The last owner was Tiber Hirshfield who was going to a wedding with five friends when the driver tried to pass a long row of cars. The touring car spun out of control and crashed, killing all but one of the passengers.

Now, the Archduke’s car is in the Heereschichtliches Museum in Vienna in the Sarajevo Room, along with Francis Ferdinand’s blood stained uniform.