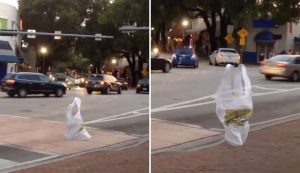 On the Internet spreads mysterious video obtained recently in a street in Milan, Italy. An occasional passer-by suddenly became a witness to an amazing sight: a large plastic bag was lifted from the ground by the wind and moved along a crosswalk, going through the bottom corners, as if by real legs!

Of course, the startled eyewitness immediately took out a mobile phone and captured this surreal picture.

Internet users put forward a variety of theories regarding the causes of what happened on the road. Some commentaries say that this is a strange illusion, and the human brain intuitively perceives the movement of the plastic bag in the wind as a living being.

According to the opinion of others, a ghost has infiltrated a pack or an evil force has captured it. Another thing is possible: someone simply bewitched a plastic bag, and in such a way he “went” for some victim. However, such comments are more like jokes …

More skeptical Internet users say that this is clearly the result of a skillful video editing: a bag walking along a pedestrian crossing looks too “live and reasonable”.

Take a look and draw your own conclusions.