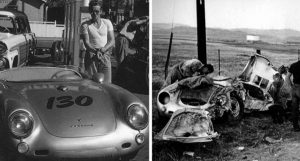 In 1955 the legendary bad-boy actor James Dean was waiting on the delivery of a Lotus Mk. X which he intended to race in the Salinas California races. The new Lotus was nowhere in sight, but the actor was offered a unique opportunity to purchase one of 90 Porche 550 Spyders in existence.

None the less he was not overly impressed with the car, and commented on more than one occasion that the Spyder was trying to kill him, and so he nicknamed it, introducing James Dean’s Little Bastard…

September 23rd 1955, James Dean met with another legendary actor, Alec Guiness. Dean arrived at the restaurant in his Porche 550 Spyder named Little Bastard and showed it off to Guiness, but the reaction was far from expected. Guiness had a bad feeling about the Little Bastard from the moment he laid eyes on it, even referring to it as “sinister”, and saying “If you get in that car, you will be found dead in it by this time next week”.

To the right is the scene of the crash wherein James Dean died while driving Little Bastard seven days later on September 30th 1955.

James Dean wasn’t just a bad-boy with a fast car, he was an accomplished driver. Dean had come in 2nd in the Palm Springs Road Race and 3rd in the 1955 Bakersfield races. On the morning of September 2nd he and his crew were leaving for the Salinas California races when James Dean suddenly changed his mind and decided to drive Little Bastard to the race himself instead of having it towed.

Record of James Dean’s recklessness in Little Bastard that day was reported by police officers that had pulled him over for excessive speeding on route to Salinas. Not long after the encounter with the police officers his Porche 550 Spyder collided head on at high speed with a Ford Tutor, a much larger and heavier car. The driver of the Ford received only minor injuries, but Dean died from numerous injuries during the ambulance ride to the hospital; Little Bastard was completely destroyed in the crash.

What Happened to Little Bastard Car

Little Bastard was taken into ownership by the Greater Los Angeles Safety Council, reconstructed, and toured around the United States as a portion of an automobile safety presentation. Somewhere between its last stop and the Volvo Auto Museum in Volvo Illinois, Little Bastard vanished without a trace.

Together with other various institutions and investors, the Volvo Auto Museum raised an astounding one million dollar reward for any information pertaining to the cars whereabouts. Despite the offered reward of what would today be eight million dollars, no information was available. To this day, Little Bastard simply vanished off the face of the Earth.

During the time before Little Bastard was put on display, some portions were sold off by its new owner George Barris, a legendary car customizer. The engine and drive train were sold separately to two competing racers who then used the parts to improve upon their own cars in the upcoming race.

One racer was killed instantly when his vehicle inexplicably spun out of control, while the other racer was seriously injured when his car suddenly swerved to the curb and rolled over at high speed. Little Bastard’s tires were sold to a close friend of Barris’ who would later be seriously injured when all four tires burst simultaneously sending the vehicle careening into a tree.

Wherever Little Bastard is today we may never know, but here’s the best part…we also don’t know where James Dean got it!

The Plants Are Psychic?