The Holy Scripture informs us that God created Adam and Eve just a few thousand years ago, by some fundamentalistic interpretations. Science informs us that this is pure fiction and that man is a couple of million years old, and that civilization just tens of thousands of years old.

Could it be, nevertheless, that conventional science is just as mistaken as the Bible stories? There is a large amount of archaeological evidence that the history of life on earth might be far different than what current geological and anthropological texts tell us. Think about these astonishing discoveries.

Beginning in the 1930s, the father of Dr. Javier Cabrera, Cultural Anthropologist for Ica, Peru, discovered many hundreds of ceremonial burial stones in the tombs of the ancient Incas. Dr. Cabrera, carrying on his father’s work, has collected more than 1,100 of these andesite stones, which are estimated to be between 500 and 1,500 years old and have become known collectively as the Ica Stones. 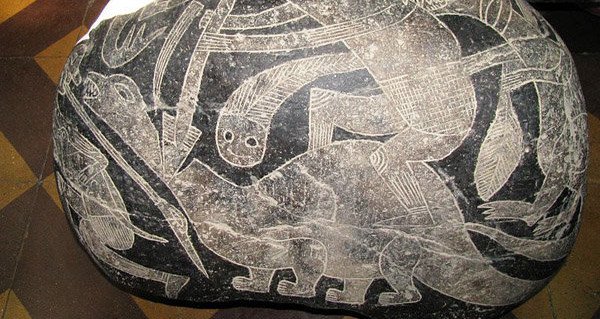 The stones bear etchings, many of which are sexually graphic (which was common to the culture), some picture idols and others depict such practices as open-heart surgery and brain transplants. The most astonishing etchings, however, clearly represent dinosaurs – brontosaurs, triceratops (see photo), stegosaurus and pterosaurs. While skeptics consider the Ica Stones a hoax, their authenticity has neither been proved or disproved.

In 1938, an archeological expedition led by Dr. Chi Pu Tei into the Baian-Kara-Ula mountains of China made an astonishing discovery in some caves that had apparently been occupied by some ancient culture. Buried in the dust of ages on the cave floor were hundreds of stone disks.

Measuring about nine inches in diameter, each had a circle cut into the center and was etched with a spiral groove, making it look for all the world like some ancient phonograph record some 10,000 to 12,000 years old. The spiral groove, it turns out, is actually composed of tiny hieroglyphics that tell the incredible story of spaceships from some distant world that crash-landed in the mountains. The ships were piloted by people who called themselves the Dropa, and the remains of whose descendents, possibly, were found in the cave.

Over the last few decades, miners in South Africa have been digging up mysterious metal spheres. Origin unknown, these spheres measure approximately an inch or so in diameter, and some are etched with three parallel grooves running around the equator.

Two types of spheres have been found: one is composed of a solid bluish metal with flecks of white; the other is hollowed out and filled with a spongy white substance. The kicker is that the rock in which they where found is Precambrian – and dated to 2.8 billion years old! Who made them and for what purpose is unknown.

Today batteries can be found in any grocery, drug, convenience and department store you come across. Well, here’s a battery that’s 2,000 years old! Known as the Baghdad Battery, this curiosity was found in the ruins of a Parthian village believed to date back to between 248 B.C. and 226 A.D. 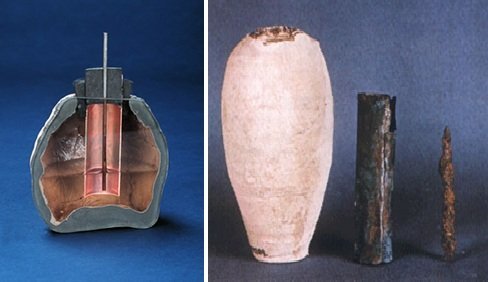 The device consists of a 5-1/2-inch high clay vessel inside of which was a copper cylinder held in place by asphalt, and inside of that was an oxidized iron rod. Experts who examined it concluded that the device needed only to be filled with an acid or alkaline liquid to produce an electric charge. It is believed that this ancient battery might have been used for electroplating objects with gold. If so, how was this technology lost… and the battery not rediscovered for another 1,800 years?

A perplexing artifact was recovered by sponge-divers from a shipwreck in 1900 off the coast of Antikythera, a small island that lies northwest of Crete. The divers brought up from the wreck a great many marble and and bronze statues that had apparently been the ship’s cargo. Among the findings was a hunk of corroded bronze that contained some kind of mechanism composed of many gears and wheels. 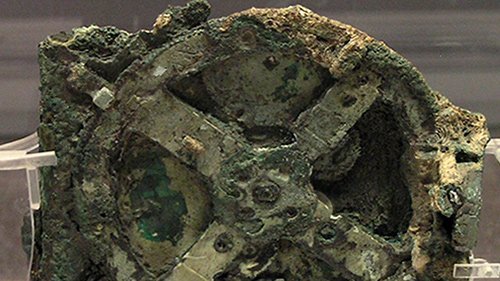 Writing on the case indicated that it was made in 80 B.C., and many experts at first thought it was an astrolabe, an astronomer’s tool. An x-ray of the mechanism, however, revealed it to be far more complex, containing a sophisticated system of differential gears. Gearing of this complexity was not known to exist until 1575! It is still unknown who constructed this amazing instrument 2,000 years ago or how the technology was lost.

While mineral hunting in the mountains of California near Olancha during the winter of 1961, Wallace Lane, Virginia Maxey and Mike Mikesell found a rock, among many others, that they thought was a geode – a good addition for their gem shop. Upon cutting it open, however, Mikesell found an object inside that seemed to be made of white porcelain.

In the center was a shaft of shiny metal. Experts estimated that it should have taken about 500,000 years for this fossil-encrusted nodule to form, yet the object inside was obviously of sophisticated human manufacture. Further investigation revealed that the porcelain was surround by a hexagonal casing, and an x-ray revealed a tiny spring at one end. Some who have examined the evidence say it looks very much like a modern-day spark plug. How did it get inside a 500,000-year-old rock?

There are artifacts belonging to ancient Egyptian and Central American cultures that look amazingly like modern-day aircraft. The Egyptian artifact, found in a tomb at Saqquara, Egypt in 1898, is a six-inch wooden object that strongly resembles a model airplane, with fuselage, wings and tail. 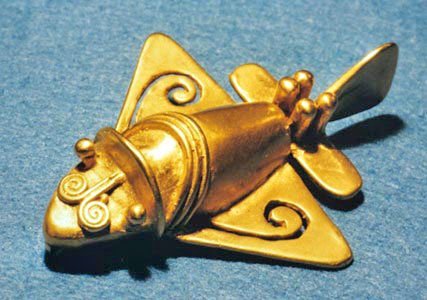 Experts believe the object is so aerodynamic that it is actually able to glide. The small object discovered in Central America (shown at right), and estimated to be 1,000 years old, is made of gold and could easily be mistaken for a model of a delta-wing aircraft – or even the Space Shuttle. It even features what looks like a pilot’s seat.

Fossils, as we learned in grade school, appear in rocks that were formed many thousands of years ago. Yet there are a number of fossils that just don’t make geological or historical sense. A fossil of a human handprint, for example, was found in limestone estimated to be 110 million years old.

Humans were not even around 65 million years ago, never mind people who could work metal. So then how does science explain semi-ovoid metallic tubes dug out of 65-million-year-old Cretaceous chalk in France? In 1885, a block of coal was broken open to find a metal cube obviously worked by intelligent hands.

In 1912, employees at an electric plant broke apart a large chunk of coal out of which fell an iron pot! A nail was found embedded in a sandstone block from the Mesozoic Era. And there are many, many more such anomalies.

Workmen hacking and burning their way through the dense jungle of Costa Rica to clear an area for banana plantations in the 1930s stumbled upon some incredible objects: dozens of stone balls, many of which were perfectly spherical.

They varied in size from as small as a tennis ball to an astonishing 8 feet in diameter and weighing 16 tons! Although the great stone balls are clearly man-made, it is unknown who made them, for what purpose and, most puzzling, how they achieved such spherical precision.

What exactly are we to make of these finds? There are various possibilities:

– Intelligent humans date back much, much further than we realize.
– Other intelligent beings and civilizations existed on earth far beyond our recorded history.
– Our dating methods are completely inaccurate, and that stone, coal and fossils form much more rapidly than we now estimate.
– In any case, these examples – and there are many more – should prompt any curious and open-minded scientist to reexamine and rethink the true history of life on earth.