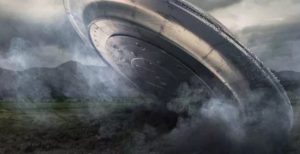 April 17, 1897: a slow flying UFO crashed into a windmill, shredding it into pieces. When people searched the debris they, allegedly, found an alien’s body.

The town’s history book called the community as “the town that almost wasn’t,” which is directly related to the alleged incident of the spaceship crashing into a windmill and the interment of the small alien, originally dubbed the “Martian pilot.” This incident became the most important news item about of the small Texas town of Aurora that was designated a historical site by the state.

A bit of trivia: This incident was turned into a film, The Aurora Encounter, in 1986, starring Jack Elam.

The news of the incident spread quickly for that era. There was a newspaper item about the incident, written by S. E. Haydon, a reporter for the Dallas Morning News.

According to the article, about 6 AM, some citizens of Aurora were amazed by the sudden appearance of an airship, as UFOs were called then, which has been flying around the city. It was traveling north and much closer to Earth than it was before.

Its speed was ten or twelve miles an hour as it gradually travelled toward Earth. It flew over the public square and, when it reached the northern part of town, it collided with the tower of Judge Proctor’s windmill and shattered into pieces, accompanied by a tremendous explosion, scattering debris over several acres of ground, destroying the windmill, water tank and the judge’s flower garden.

The airship’s pilot was thought to have been the only one aboard. His remains were disfigured, but what remained was enough to evidence he wasn’t human.

On May 24th, the United Press International, UPI, published news about the incident. According to the article, there was a grave that contained the remains of an 1897 space traveler who was “not an inhabitant of this world,” according to the International UFO Bureau.

This group investigates UFOs and had initiated legal proceedings to exhume the body and will go to court, if necessary, to open the grave, director Hayden Hewes said.

The group inspected the grave site with metal detectors and gathered facts for three months. The Aurora Cemetery Association fought attempts to exhume the alleged alien body and prevailed..

The UPI found a living witness to the crash. She was a ninety-one-year-old woman, who was a fifteen-year-old teenager when the incident occurred.

Her parents had been to the crash site, but didn’t allow her to accompany them for fear of what could be in the debris. She remembered that the remains of the pilot that she called “a small man” were buried in an Aurora cemetery.

One fragment was consisted of mostly iron, which did not seem to exhibit magnetic properties. The fragment was shiny and flexible instead of dull and brittle like iron,” reminiscent of the 1947 debris from the Roswell UFO incident.

Sightings aired a special program called “100 Years of UFO Cover Ups” that featured the recovery of the alien’s body. According to the show, this incident was covered up by the US Government and was deemed a hoax.

The US government has a long history of cover-ups regarding UFOs and aliens. The 1965 Kecksburg, Pennsylvania UFO incident is another cover-up.

There was a field investigation of Aurora. One of the first things the team noticed was that there were signs of the military everywhere, including a small military-style airport, circa the 1940’s. Streets are laid out in typical military base configuration. Some people wonder why the military would be interested in the small Texas town.

The Aurora cemetery was tidy, with no sight of the alien’s tombstone. It was stolen years ago and never returned. Pictures document t he fact that the grave marker existed.

There is a group in town that wants to exhume the alien’s body, replace the tombstone and perform an extensive search for debris of the crash. There were several metal pieces found in the area that the military confiscated for analysis and never returned.

Stan Friedman, respected nuclear physicist and UFOlogist, says US government covered up UFO incidents. He has investigated UFOs since 1958, for over fifty years, in the quest for scientific proof of their existence.

He began giving lectures in 1967. He gave lectures about UFOs to over seven hundred colleges and professional organizations in all 50 US states and, also, abroad. He is convinced that the Roswell UFO was covered up by the US military and government.

The CIA’s MK-Ultra was a clandestine operation. Its experiments involved using LSD to induced Altered States of Consciousness, ASCs, for “mind kontrol.” Their victims, primarily unsuspecting military personnel, were given the drug without their knowledge or permission.

This covert program was top secret until the mid 1970s when it became public knowledge and caused an outcry. Although the CIA intentionally destroyed most of the records in 1972, there are indications that the experiments continued into the 1970s.

If the US Government and its military covered up an inhumane experiment, why would they not cover up UFO incidents?