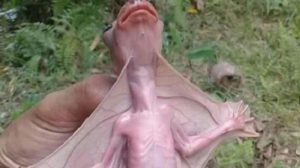 Last month, videos appeared on the Internet in which residents of China and Argentina show very strange bats. Creatures seemed to be the result of a rat, frog and bat crossbreeding.

According to the conclusions of some experts, animals can actually be mutated hybrids that were born by mixing DNA in some kind of underground laboratory. Perhaps the mutants were created by local scientists.

Creatures can not only fly, but also crawl, as well as swim. Outwardly, they are very unpleasant and scary: they look like humanoids.

Government agencies have now launched an investigation. Everyone wants to find out what kind of bats was spotted.

Bats of the “new format” were discovered in the midst of the coronavirus pandemic.

It is not known where the creatures “crawled out” from or where they hid before.