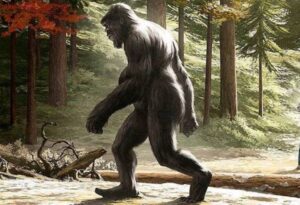 On the evening of January 23, 2021, Californian police officer Rick Bates was driving down an empty highway, returning home when he saw a very massive humanoid figure lying face down on the side of the road, covered from head to toe with brown hair.

The site of the American Bigfoot Field Researchers Organization (BFRO) recently posted a new Yeti sighting report that was sent to them by a police officer named Rick Bates.

On the evening of January 23, 2021, at around 8:15 PM, Bates was driving his car home to Garberville, California, on Highway 101, returning from a mission from Brookings, Oregon.

“I was driving home from Brookings Oregon on 1-23-21. I was south bound on highway 101 south of Garberville, Ca and south of the Benbow Inn. The road makes a few turns and the speed limit drops in the area.

“As I rounded a sweeping right hand turn I saw a figure on the south bound shoulder of the highway. I was the only vehicle in the area about 8:15 PM. My speed was about 45-50 MPH as I passed the figure.

“The figure was laying on the shoulder of the road on its right side. I estimated the height to be about 7’. I was looking at the creatures back and noticed it had broad shoulders and was thick torso shape. While the shape similar to a human it was not human. It was not a bear either.

“I could see muscular features in its glutes and a head on the shoulders that was somewhat tapered toward the top and being held off the ground. It’s hair was chocolate brown and very course. The hair was not fur like of a bear at all.

As an avid hunter and fisherman I spend a lot of time in the woods. I spent every summer camping in that area as well as a kid. I have never seen anything like what I saw just this evening.”

Singular Fortean researchers have discovered that a police officer named Rick Bates is indeed a real person who serves at the headquarters of Ronert Park, California.

Researcher Matthew Moneymaker was later able to contact Bates and talk about his case. He said that Bates is only 20 years old, but he is described as a very observant and responsible person.

“He drove this highway many times and he no doubt saw a large animal lying next to the highway in the dark, illuminated by the headlights of his car. The question is, what kind of animal it could be.

“He hunted bears, elk, deer, etc., and he says that this creature had a manifest human body form, but covered with hair. His body was lying perpendicular to the highway. His feet were within 1 foot of the white line on the side of the highway, as if he had been hit by a car earlier,” Moneymaker said.

Physicist claims Black Holes are gates to other universes, and we live in one of them

During a chess match, a robot grabbed and broke a finger of a 7-year-old boy