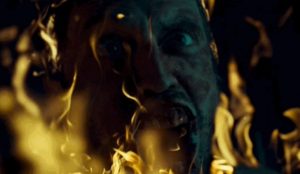 The man I mentioned in the title is an entity (I don’t know what exactly to call him) that has become attached to me in the past year. And I’m trying to understand and help him.

By “attached”, I mean that he is attached to me as a person and not as an energy source to drain. A few times I’ve felt the usual spirit attachment symptoms (felling drained, ill, or getting heart pain), but his presence almost always gives me the opposite: a feeling of reassurance, comfort, and even makes me feel energized when I need it. And when something bad is happening to me I will see something that I’ll find funny or feel strong hopefulness. And he often gives off a feeling of security.

The signs he’d leave used to be very subtle but now are very frequent and strong. He used to contact me mostly through dreams but now he appears in waking life as often as in my sleep.

I see apparitions of him at least a few times a day and he almost always looks solid. He gives me advice and comments on everything around me by giving me sudden ” blocks of thought” in my mind, like strong telepathy. I can almost hear him talking in my mind, sometimes in my own voice, sometimes in his.

The more attached he became to me, the more I felt he began learning from me. He now has his own opinion about everything around me, repeats things I say or songs I listen to, and sometimes tries to explain when I’m wrong in something and gives me advice or even warns me for things that turn out to be true.

I researched the name Aizel and the only information I could find was in the Bible, a Babylonian prince named Aizel during the time when the tower of Babylon fell. There’s nothing else mentioned about him. I’m an atheist but that information was interesting. I also found a artist nicknamed Aizel KON and much of their art included death, demons, sadness, and burn scars.

After I couldn’t find any more information on the name, I began researching other Hebrew names and their translations. Turns out, Aizel means “shadow of the ruin” or “shadow of the void”.

When I wrote the meaning of his name down, I looked through the window and saw a large cloud in the shape of a human with open wings, facing at me (I don’t believe in demons and angels but I keep an open mind).

Later that night I saw a very bright star that immediately disappeared. Then when I went to sleep I saw him in a completely dark place, emitting light from his body and he was surrounded by animals. It was as if nothing existed outside of the light, like we were in the middle of a void. He looked at me, reached his hand out and told me to come closer and to stay in the light. I felt inexplicably peaceful and the moment I gave him my hand I too began glowing. He gave me a small black dog to hold that looked at me really intensely, and I began thinking I was dying in my sleep. It shocked me so much I tried to wake up, and he kept insisting I wasn’t dying and that he brought me there for a reason.

I woke up and was still struggling to open my eyes and get up. I heard his voice telling me to stay with him as he put my hand down and caressed my face when I tried to turn on the light switch. And for a moment I really saw him lighting up in the dark. Once he disappeared I gained back full consciousness and felt something that I can’t explain but it was a good feeling.

Aizel started out looking like a walking corpse, with a dead empty stare, a very calm voice, and was always expressionless and depressive. His moves were also slow. Over time that changed. His stare now is very intense, to the point I can’t stand looking at him for too long. His eyes are intense green and sometimes look almost like they’re glowing. He often appears smiling widely, with his teeth showing, and has become very expressive.

Personality wise, he seems to be very empathic and sensitive, always offering advice or even to watch my home while I was away and a family friend took care of my dogs (that family friend told me he had to lock my room’s door because it kept opening on its own, and he even saw the knob turning). He’s also unstable sometimes, as he can get upset over things that don’t really matter. He has his own sarcastic sense of humour and often doesn’t accept his opinion may be wrong. He’s also often envious. He has said and shown enough times that he’s in love with me.

I’m trying to understand him but there are questions he has said he won’t answer to, including his purpose here, and why he appears to me. I feel like he’s expecting me to just figure everything out on my own. This is the 4th post I’ve made about him, you can find the other 3 on my profile for more information. There are many more details I’d like to mention, but would make the post too long. Any advice is welcome.