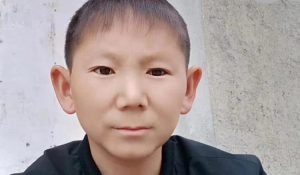 This person in the photo is actually 34 years old, but most people think that this is a 13-14 year old teenager.

The man’s name is Zhu Sheng Kai, he lives in the countryside near the city of Xiantao, Hubei Province. Because of his appearance, a man cannot find a wife for himself, none of the women want to meet with him.

When he was 6 years old, he played with other children and they threw stones at each other out of prank. And then a random stone hit Zhu right on the head.

He didn’t even have blood on him, only a small abrasion, but in the next three days the boy had a headache and fever. He was taken to a hospital where surgeons found a small blood clot in the brain. Zhu had an emergency blood clot removal operation and the boy quickly recovered.

The next few years, nothing indicated that the wound and the operation had a serious effect on his body. However, even at the age of nine, the boy still looked no older than six. It was as if he had stopped growing like Peter Pan from the moment of that wound.

Zhu’s parents took him to the hospital again and found out that the boy had a pituitary gland damaged and that was precisely why he could not grow up. He was given some medications, but they only helped the boy become a little taller. In the next twenty years, his body still has not gone through puberty.

“I am 34 years old, and my body is still like that of a child. I can’t have children and no one wants to marry me, ”says Zhu.

Zhu tried to see the doctors, but they seem to be unable to do anything about his condition. Therefore, Zhu finally resigned himself to his “curse”, as he calls it, and began to establish his bachelor life. He opened his hairdresser and even jokes about his eternal youth.

“When all my peers will be covered by age-related wrinkles, I will still be young with a childish and innocent face.”

Mystery as giant stone road resurfaces from beneath the Pacific Ocean