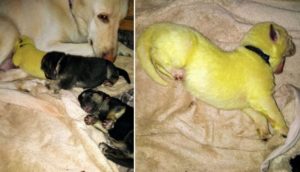 A family in North Carolina couldn’t believe their eyes when a lime-green puppy was born to their white German Shepherd.

The colorful puppy has reportedly arrived in this world as part of a litter of eight puppies delivered last Friday morning by Shana Stamey’s dog Gypsy.

At first the birth seemed ordinary, but the situation took a strange turn when the fourth puppy was born and sported a surprising appearance.

“I started freaking out because it was green,” Stamey recalled to a local TV station.

Since the puppy appeared perfectly fine apart from her peculiarly colored fur Stamey said, “I knew it wasn’t harmful. But I still had to look it up again to make sure.”

Luckily, her suspicions were correct as a veterinarian stated that the pup’s fur was possibly stained in the womb after coming into contact with some stool produced by the litter.

But some do not agree with the conclusions of the veterinarian.

“If the dog was colored in the womb, why are other dogs normal color?”, asked one commentator.

While the inadvertent color may fade over time, the curious color of the dog at birth will follow her in life by the name of: Hulk.

Explaining the moniker’s origin, Stamey noted that not only was the puppy lime green, of course, but he was also “super mad.”

Sometime later this year, the family hopes to find a home for Hulk and his canine kin for ever.