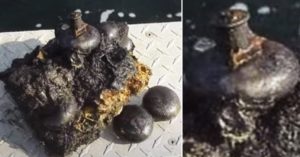 There are a number of artefacts, found at varying parts of the world, which, fly in the face of current paradigms, in regards to the chronology of man, reports ufosightingshotspot.blogspot.com.

Iron pots, zinc vases, even imprints of ancient chariot wheels, are but a few artefacts, which have in the past, been found in numerous coal seams – and found by people in positions of responsibility, whom often testify not only in regards to their legitimacy, but are often accompanied by the lump of coal in which they were found – still possessing the intriguing imprint upon their surface, undeniably supporting the testimonies of these individuals, all but proving authenticity beyond doubt.

Like that of the iron pot, and its accompanying coal block which was its tomb, carbon dating has indicated that the pot is an astonishing 300 million years old.

However, as time goes on, and coal mining, along with many other mining activities becomes more rapid and advanced in nature, it is simply a matter of time before even more mysterious and unexplainable artefacts are also found.

Unfortunately, due to the controversial nature of these artefacts, it is very likely that a number of them have either been shrugged off, or actively destroyed before ever achieving wide spread acclaim.

However, fortunately, the next artefact of interest, just like that of the many others we have previously covered, can not only be seen as yet another smoking gun, indicating that there has been a number of advanced phases within human civilisation, but yet again, this timeline could in all possibility, date back an astonishing 300 million years.

Although modern society has been taught that we are at the height of human accomplishments, many of the techniques we currently claim as our own accomplishments, could have been achieved an unimaginably long time ago, far back within earth’s history.

Dated to the same age as that of a number of other artefacts, which we have covered in the past, a group of brass doorknobs were once abandoned, eventually finding their way into a coal seam, which has been dated as 300 million year old geology. Found still encased within this ancient strata, these astonishing artefacts are undeniably of incredible age.

Unfortunately, and rather predictably, not much has been done in regard to mainstream investigation into said artifacts, and their current location, if indeed still in existence is unclear, yet fortunately, before their disappearance, photographic evidence was taken.

Subsequently allowing us to add it to the volume of research and artefacts which not only support our posit of lost civilisation, but place human activities an impressive 300 million years back into earth’s history.

Who made these brass doorknobs? Could we really be a civilisation hundreds of millions of years old? We find the evidence to suggest such, highly compelling.