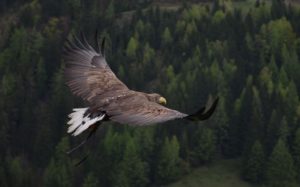 What do we know about birds? It may seem at first sight that there is nothing amazing about them. However, the feathered tribe makes the group of one of the most ancient creatures on earth, which makes them the subject of numerous legends, myths and mysteries.

It is an open secret that modern birds are descendants of dinosaurs. Scientists discovered the fossils of giant carnivorous birds in Antarctica, the Phororhacoids, that lived on the planet more than 40 million years ago.

The monsters were up to three meters tall and had bull-sized heads armed with powerful 60-cm long beaks. The flying monster was terrorizing the whole animal world of those times.

US scientists managed to grow toothed chickens in the beginning of the 21st century. The tiny teeth of the chickens reminded those that ancient birds used to have.

Not so long ago, Chinese specialists found the fossils of a small two-legged creature, dromaeosaurus, with feathers on its head and body. Apparently, feathers originally appeared to warm the animals, and were later used for flying.

The feathered race of modern times continues to startle researchers too. It seems that birds can assimilate and process information and therefore possess a certain kind of intellect.
US scientists developed a unique camera, which allows to see the world through the eyes of a bird.

The tiny Eagle Eye Camera can be fixed to the body of a bird and does not cause any inconveniences when flying. The camera makes 4,000 frames a minute, which corresponds to the speed at which birds perceive information from the outer world. The film will then has to be slowed 100 times to make it watchable for humans.

Birds are also capable of scanning the future. They can see all movements that they will make during the next several hours, as well as dangers and obstacles that they will have to overcome. Birds use this irrational capability for their orientation in space.

Specialists are also interested in mysterious creatures, which look like birds, but do not appear to be birds. Scientists came across a large creature in the mountains of Cameroon. The creature looked like a black bat with the face of a monkey and the wing spread of 3.5 meters.

A well- known writer, ethnographer and anthropologist, Frank Melland, collected the information about the flying reptile living in the swamps of the north-west of Zambia. The weird creature is featherless and has smooth skin, but its beak is full of teeth.

The wing spread of the bird reaches over two meters. Melland believes that it goes about the archaeopteryx, although it is generally believed that the species became extinct together with dinosaurs about 64 million years ago.

Many nations around the world have many tales about the amazing race of winged creatures – bird-people. Reports about amazing encounters with bird-people appear in our times too. Statistically, they can be spotted in Russia’s Amur region and in Mexico.

They say that the creatures have gray feathers that spread up to 4 meters. Bird-people have human-like heads covered with fur hair, big eyes and clawed paws that can kill a wild boar.

Hidden Treasure of The Copper Scroll