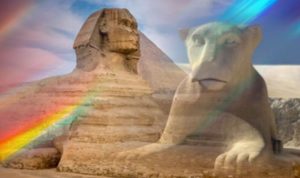 According to Egyptologist Colin Ryder, an amazing discovery was made in the Great Sphinx, which is important for understanding the history of the ancient Egyptian civilization.

The Great Sphinx is a statue of a mystical creature made of limestone. The creature has the body of a lion and the head of a man; it stands on the Giza plateau (western bank of the Nile). According to archaeologists, the statue was erected in the fourth dynasty to protect Pharaoh Khafre. Half man and half lion shield the pyramid.

If you look closely at the Sphinx, you will notice the disproportionate head and body: the head is too small, and the body is long and tall. The Egyptians could not make such a mistake. Colin Ryder is confident that the scientists missed some element.

The scientist stated that he may have solved the riddle. Most of the time the body of the Sphinx was under the sands of the desert, but the head was not. Sand is an excellent protection for all buildings.

Meanwhile the head, under the influence of external factors, should have completely collapsed, but this did not happen. Most likely, someone cut off the protruding head and remade it. Initially, the appearance of the Sphinx could be completely different.

Some conspiracy theorists believe that the sphinx’s head originally had the shape of an alien’s head, but it was replaced by a human head.

But historians have a different opinion. The Egyptians were respectful of lions and depicted them on rocks and stones. Therefore, initially the Sphinx could be a familiar statue of a predator, and not a half-man and half-animal.

There is truth in Colin Reeder’s words, but his theory, like any other, needs to be tested.