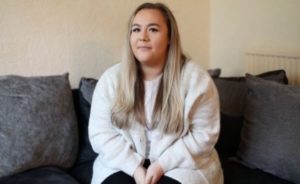 If most people appreciate funny friends, then 17-year-old Billy Hodgson is forced to avoid them, because after talking with them she often ends up in the hospital.

The girl lives with a very rare disorder – cataplexy. This is sudden and uncontrolled muscle paralysis. As soon as Billy experiences strong emotions or laughs, she immediately faints.

The girl so far has found only one way to deal with the problem: she bypasses her cheerful friends who, with their sparkling humor, make her laugh all the time.

Billy is a cheerful open nature, so she still can not accept what she needs to be fenced off from the same people. A girl cannot remain herself until the end.

The disease first appeared at the age of 14 at school. Since then, she carefully selects companies for communication, and also constantly strains when talking with strangers. The girl is not able to control the body.

There is no cure for cataplexy. Fortunately, the girl copes with her emotions. Putting up with a problem is sometimes very difficult, but a teenager tries not to lose a positive attitude.

Astronomers scanned the region of the sky from where the signal “Wow!” came to Earth