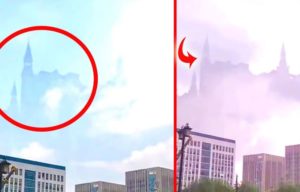 The people of China almost believed in a miracle when the hovering Hogwarts appeared in the sky.

This event took place on September 11 in the Chinese city of Jinan. The locals saw a flying structure in the sky, which was very reminiscent of the Hogwarts school of magic, known from the books about the wizard Harry Potter.

Despite people suggesting that the castle in the sky is proof that a parallel universe exists, local media reported that the sight was a natural phenomenon called a Fata Morgana or Mirage.

The sky phenomenon occurs because rays of light are bent when they pass through air layers of different temperatures in a steep thermal inversion where an atmospheric duct has formed, therefore it is quite possible that a building nearby matches the strange phenomenon in the sky.

Many might think that this is just a montage, but some of the users of the Chinese site Weibo managed to capture an incredible phenomenon on video. The resulting footage was immediately posted on social networks.

Those who believed that a magical structure had indeed appeared in the sky were very disappointed when they learned that this was nothing more than a common natural phenomenon – a mirage.

Now the Chinese are asking a different question – what kind of structure appeared among the clouds a few days ago?