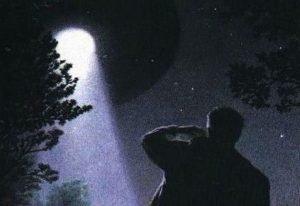 The story of Woodrow Derenberger and Indrid Cold is strange to say the least, it often sounds like a deranged man living in a delusional world. In fact, it probably would have been long forgotten if not for its connection to the famous Mothman story in West Virginia.

Derenberger’s strange tale began on November 2, 1966. As Derenberger, a salesman, was returning to his home in Mineral Wells, West Virginia, from a trip to Marietta, Ohio, he had a very strange encounter with a UFO and something, or someone, named Indrid Cold.

As Derenberger drove towards home in his truck, he noticed another vehicle coming up behind him at a high rate of speed. Quickly, the vehicle passed Derenberger and then pulled back over into his lane and stopped.

Derenberger said he slammed on the brakes, turning his vehicle sideways in an attempt to avoid a collision. This is where the story gets very strange. Derenberger said the vehicle that was now directly in front of him, looked like an old-fashioned “Kerosene Lamp”, with fire shooting out both ends.

It was huge, and seemed to float a couple of feet off the ground. Then a door opened and out stepped a strange man. Derenberger described the man as being close to six feet tall with having dark brushed back hair. The man wore a dark overcoat and a dark blue suit. Overall a normal looking man.

As the man approached Derenberger’s truck, he said the kerosene lamp looking vehicle rose up to about 40 feet off the ground. The man spoke to Derenberger by telepathy and said that he was “a seeker” and that his name was “Cold”.

Cold then went on to ask Derenberger several questions about the area around Parkersburg, WV. The conversation appears to have been short and the strange “Cold” ended the encounter by telling Derenberger, “It’s been nice talking to you Mr. Derenberger. We will be seeing you again”.

At that point the strange vehicle reportedly lowered to the ground, “Cold” got back on and the vehicle ” Shot off into the sky”. 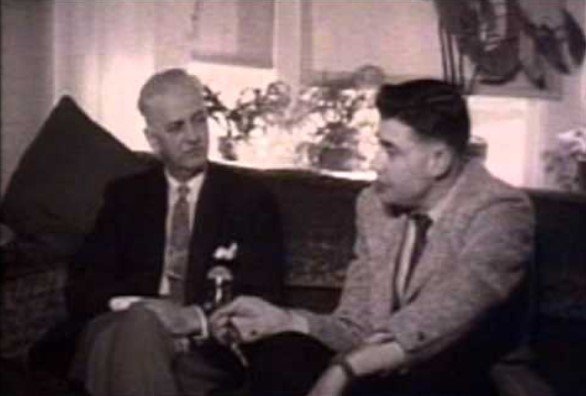 The story of Woodrow Derenberger however does not end with the one encounter with Indrid Cold. Derenberger would later claim that he not only continued to be in contact with Cold, but that he also met other “Seekers”.

He said their names were “Demo Hassan” and “Karl Ardo”. Derenberger went on to tell of how Cold had taken him to a planet called Lanulos, in the galaxy Genemedes. The planet and galaxy are both unknown to astronomers.

Just 10 days after Derenberger’s first encounter with “Cold”, the now famous Mothman would be seen for the first time. Author/Investigator John Keel, the first to investigate the Mothman story, seemed to believe that Cold and Mothman were connected.

This may or may not be the case, but while in Point Pleasant, West Virginia, investigating the Mothman reports, Keel received a phone calls from someone who identified himself as “Indrid Cold”.

Keel would later reveal that the mysterious Indrid Cold, gave him a cryptic warning. Keel was told to not return to Point Pleasant because something very bad was going to happen there. Keel would later relate the story in his best-selling book ” The Mothman Prophecies”.

It would be easy to dismiss the bizarre tale of Woodrow Derenberger. But the question of what really happened to what appeared to be a normal, well-adjusted man remains. Perhaps Derenberger had such a strange, unexplainable encounter, that he was just not able to handle it on a mental level, and that he truly became unbalanced. Then again, maybe he was just telling the truth.