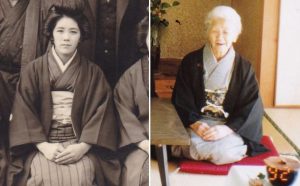 Kane Tanaki, a Japanese woman believed to be the world’s oldest person, has died at the age of 119.

The woman was born on January 2, 1903 – the year of the first controlled flight of the Wright brothers in their motor plane. In 2019, she was listed in the Guinness Book of Records as the oldest living person.

She died of old age in a hospital in Fukuoka, western Japan. Throughout her life, she was partial to chocolate and soda.

Despite her age, she typically woke up at 6am and was still learning, often studying subjects like maths during her afternoons. She also loved playing the classic board game Othello and had become an expert at the game, often beating nursing home staff.

In 2021, Tanaka even planned to take part in the Olympic Fire relay race at the Tokyo Olympics, but had to drop out due to the ongoing pandemic.

The mantel of the world’s oldest living person now goes to French nun Lucile Randon, who is 118. She was one month and nine days younger than Mrs Tanaka before the latter’s death.