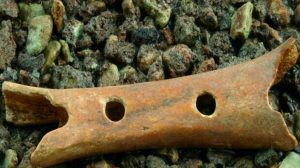 It seems that Neanderthals were able craftsmen with a fine taste in music, unlike what mainstream historians have irresponsibly affirmed.

Discovered inside a Slovenian cave in 1995, the Divje Babe flute is a history-challenging artifact dated to between 60,000-43,000 years back, that had belonged to Neanderthals – the early hominids predating Homo sapiens, or modern humans.

The age-old item made from a fragment of the femur of a juvenile cave bear has long been regarded as the oldest musical instrument ever unearthed.

The holes present on the bone are evenly spaced and are perfectly circular, proving that Neanderthals were music lovers with a fine eye for details, unlike the good-for-nothing subhuman brutes portrait coined by most historians.

The archaeological site at Divje Babe, Slovenia, is situated inside a narrow 148 ft-long/49 ft-wide cave standing 750 feet (230 meters) above the Idrijca river,near the city of Cerkno.

Over 600 archaeological remains were dug out from within ten levels of rocks and soil, of them reminding of various cave bear skeletal remains and about 20 fireplaces pointing at neanderthal habitation approximately 55,000 years ago.

The flute fragment spans 11.6 mm, and has two complete circular cavities about 35 mm apart. There has been a fiery debate about whether or not the flute is hand-made by Neanderthals, or by some ferocious carnivore at that time.

A similar discovery was made in 2008 when, inside a cave near Ulm in Germany, another bone flute dating back 43,000 years was brought to light. With five holes and a v-shaped mouthpiece, the artifact made of vulture wing bones indicate once again that Neanderthals were able to produce musical instruments.

This idea was hard to digest inside academia circles, so upon announcing this discovery, researchers proposed that ‘the finds demonstrate the presence of a well-established musical tradition at the time when modern humans colonized Europe,’ once again ignoring the time frame and Neanderthal’s potential to craft such instruments that would have been extremely hard, if not impossible to attain with their primitive tools and reduced intellect.

Dr Cajus Diedrich from the Paleologic Independent Institute of Geosciences has analyzed these musical instruments attributed to Neanderthals and has reached a controversial conclusion – the holes present on the bones are nothing more than teeth marks, in this particular case of hyenas. His study was featured in the Royal Society of Open Science.

This is really surprising to hear, considering all the evidence pointing into the opposite direction, which are completely ignored. On top of that, many professional singers and even archaeologists have played these flutes and made astounding music.

“The research suggests historians have been fooled by these phoney objects – and, in fact, all such ‘instruments’ attributed to neanderthals are simply chew toys of animals,” Mail Online reports.

Although Dr. Driedrich had neglected all presented evidence in favor of his theory, the Divje Babe flute remains a veritable musical instrument in the eyes of many scientists.

The fact that it originates from a time considered by many to have been dominated by mindless brutes without the ability to create anything of grace is what irritates the paradigmatic minds of the present.

Drastically modifying chapters of history would definitely put a lot of pressure on some academic’s shoulders who hold their titles more dearly than the truth itself.

Fortunately, the passing of time will unearth more history-challenging evidence that will once again shift the paradigm, hopefully this time in our favor.