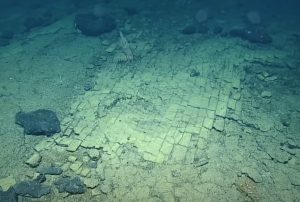 “Yellow Brick Road” discovered by scientists at the bottom of the Pacific Ocean during the study of underwater volcanoes.

Scientists investigating an ancient undersea volcano chain in the Pacific Ocean have discovered what appears to be a “yellow brick road”. The brickwork was actually the result of volcanic activity, which “decorated” the rock in such an unusual way.

Pilots of the E/V Nautilus submersible exploring the ancient seamounts of the Liliuokalani Range have made a discovery, which you can watch in the video below. In the video, a team is trying to unearth a manganese crust from the seafloor with a robotic arm.

The device, in the process of operation, stumbles upon a dry area, which they call the “baked crust”, where the “yellow brick road” appears.

“What is it?” one researcher asks with surprise. “Road to Atlantis,” says another.

“What may look like a ‘road’ to the mythical city of Atlantis is actually the result of ancient volcanic activity,” the researchers explain.

The bizarre geological formation was located along the summit section of the Nootka Seamount in the Papahanaumokuakea Marine National Monument.

At first it looked like a section of a dried lake bed, but it has since been identified as hyaloclastite, which is a type of volcanic rock.

The reason it looks like a brick road is because it has been eroded by repeated heating and cooling over time as the region erupted.