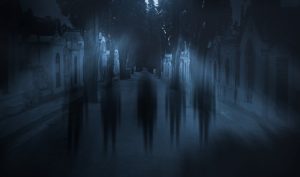 According to survival theory, a part of humans and animals survives the death of the physical body. Earthbound spirits are those of people whose physical bodies have died, but don’t pass over to the light. They and their kin are collectively referred to as ghosts, spirits, specters, phantasms, entities and phantoms.

When discussing earthbounds, apparitions and residual hauntings, it must be noted that all three can be seen, heard, felt by touch, smelled, tasted and sensed as a presence.

Apparitions refer to those who have passed over. It’s said that apparitions and earthbounds have intelligence and can interact with people and animals.

Residual hauntings are energy imprinted on time and space, like a video tape and have no intelligence.

EAPs’ antics include moving, tossing and apporting objects, affecting electrical and electronic devices, igniting fires and causing water to appear. They have intelligence and perform feats that are physically beyond that of some other entities. The majority of EAPs are merely mischievous.

It’s most likely that EAPs are earthbounds. Would a spirit of one who has passed over create mischief of start fires?

It’s believed that all earthbounds emit intense feelings of sadness and depression, sometimes accompanied by confusion and/or fear. Reasons why earthbounds stay include:

– Some don’t know they’re dead
– Extreme emotional trauma at time of death
– To take care of the living
– Fear of being rejected from the Light by what the spirit thinks s/he should be ashamed of doing
– To take care of something left undone
– The living won’t release them
– To bring a killer to justice
– Revenge, in extremely rare cases

There’s disagreement about whether or not the ghosts of drug, alcohol and sex addicts are earthbound due only to their dependency. Some believe the addictions remain and that it’s these that keep a spirit earthbound.

The counter to this is that there is no corporeal body, so how could physical dependency alone cause an entity to be earthbound? Addiction affects the mind, so it’s logical that an emotional factor is at play.

Is the Spirit an Apparition or an Earthbound?

Apparitions of the dead try to communicate information or comfort people close to them in life. Collective apparitions are those who have been seen by more than one person. Animals also react to them.

Deathbed apparitions are seen by the living while they’re dying. Crisis apparitions try to convey that fact that the person is in severe trauma. Most are dying or have just died. The living can be crisis apparitions, but they aren’t considered ghosts.

Earthbounds and apparitions share the aforementioned qualities; however earthbound spirits emanate feeling of great distress and/or confusion. It’s believed that equipment, including tape recorders and cameras, can often detect an entity’s presence, but it can’t differentiate between the two.

Many say that the best way to discern if the spirit is an earthbound is for a psychically talented person to sense whether or not the spirit has passed over or not by trying to communicate with the ghost.

How Can Earthbounds be Released?

In order to release an earthbound entity, it’s believed that one must soothe the spirit, treating it like a scared child, while encouraging it to go the light. The reason why the spirit is earthbound must be discovered and alleviated. If the spirit doesn’t know the physical body has died, is confused or is afraid, these factors must be addressed.

It’s inadvisable to do what one wannabe ghost hunter did during an investigation: He yelled angrily at the entity and demanded that it prove its existence. He called it a coward and other derogatory names.

Later, the same man was featured in a TV ghost hunter show along with other “wannabes.” Unfortunately, many of these shows are geared to gain audiences by sensationalism and distorting facts, as was the case in this episode, which upsets legitimate ghost hunters and parapsychologists because it’s giving the public wrong ideas.

It’s also said that spirits who have passed on and other spiritual beings can be asked to help, as needed. If the “releasement” is successful, there are signs that almost always include feelings of peace and relief. If unsuccessful, more “releasements” are needed until the spirit has passed over.

Man Received 27 Stab Wounds, But Survived and Spoke With Angel