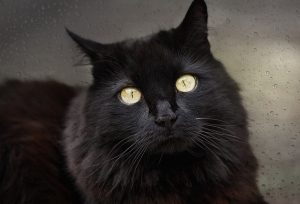 Do you freak out if a black cat crosses your path? For many people, a black cat is the ultimate bad luck symbol. For others, black cats are associated with evil witches and sinister spells. But are black cats really bad luck, or do they just get a bad rap?

Chances are you already know much about the superstition associated with black cats. If one crosses your path, you’re in for some bad luck. Some even believe this occurrence is an omen of death!

The notion of cats as evil demons and witches’ familiars came about during the Middle Ages. It was also believed that a black cat crossing your path meant that your connection to God would be blocked, and you wouldn’t get past Heaven’s gates.

Holy god-fearing people would destroy black cats for this very reason. They would also kill or punish people who cared for black cats.

Although bad luck stories get the most publicity, there are perhaps just as many good luck beliefs about black cats.

Many cultures value black cats. In Scotland, if a strange black cat turns up on your doorstep, it is a sign of abundance and prosperity. Black cats are also considered lucky in Japan. According to folklore, a lady who owns a black cat is destined to have many suitors.

Finally, in ancient times, sailors often kept a black cat on board their ship for good luck at sea. In some cases, this tradition of keeping a “ship’s cat” is still carried on today.

As any cat lover will tell you, all cats are good luck regardless of their color. And those who own black cats are the first to admit that these felines are fabulous!

Black cats are not responsible for the troubles that befall us. When it comes to superstition, the power of so-called bad luck is created nowhere but in our minds.

Bad luck or good luck, symbols are what we make of them. So, the next time you see a black cat, don’t assume it’s a catastrophe.

Mysteries of Birds: Capable of Scanning Future and Other