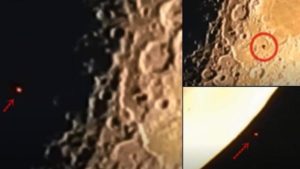 Recently, cases of detection of unusual space objects flying near the moon, as well as various structures of artificial origin, have become more frequent.

And all this against the background of the activity of the world’s space powers to study the natural satellite of the Earth.

On December 20, 2020 at 4:42 pm, an amateur astronomer, observing the moon, filmed an object moving against the background of a natural satellite of the Earth.

The footage shows how a UFO appears to the left of the moon and after a few seconds moves to the other side of the satellite.

Some ufologists believe that representatives of alien civilizations do not really like the increased activity of people on the moon recently, especially on its far side.

Therefore, they began to express themselves more often, warning humanity that they are not the only one who is interested in the natural satellite of the Earth.