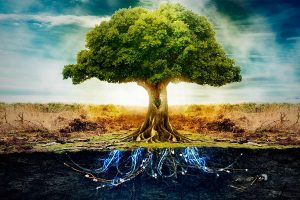 Trees are some of the most majestic natural organisms on the planet. They are the primary suppliers of the oxygen that all land animals need. Without them, multicellular animal life on land would suffocate in their own carbon dioxide production in a manner of a miniscule amount of time with the limited supply of oxygen put out by other plant life.

This symbiotic bond between living animals and living trees (they give us oxygen and we give them carbon dioxide) seemed very mystical and magical to ancient civilizations who did not even know of this exchange. They knew that trees had power of their own even though these ancient people did not understand the science of it.

Religions of antiquity revolved around the sacredness of trees such as all types of shamanism. Pagans who worship nature as a foundation for their religion feel trees are extra special—the Druids of the Celtic peoples in particular. Each tree has a unique spirit and specific powers that it holds within its bark.

The elder tree was sacred to the Druids’ White Lady, letting the tree also be known as Lady Elder. It even has an association with Venus as well. Such power contained in this type of tree made it as dangerous as it was powerful. Should anyone ever burn the tree or completely chop it down and kill it, they were thought to be cursed by the Lady personally.

The Midsummer Solstice was the time of the most power for the elder tree as it was a time linked strongly to the White Lady. Standing under an elder tree during the Solstice would give a person the Sight in order to see normally invisible spirits. It was very common to make wands from these trees as they were powerful enough to drive out evil spirits with ease.

The cedar tree is a strong pillar of spirituality, called the Tree of Life or Arbor Vitae. It is believed to represent the Earth. To draw on the Earth energy of these trees (thereby grounding oneself and strengthening one’s self control to go against any outside influences), a person simply has to place the palms of his or her hands against the ends of the cedar’s leaves—while still attached to the living tree if reachable.

The spiritual nature of this tree also had practical purposes as the Celts of continental Europe used oil from the tree to preserve enemy heads that were taken during battle.

The yew tree (also known as the European or English yew) is one of the most important trees in nature worship throughout Europe. The tree itself has a lovely gold colored wood with a wavy grain. It is thought to be one of the oldest tree specimens on the planet. Even though almost all of the tree is poisonous, with the exception of the flesh of the berries, it was recently found out to be very useful in the treatment of cancer.

Celebrations of the Winter Solstice focus strongly on the yew as it is supposed to be closely linked to the deities of death and rebirth. This mystical link means that it was used (collections of the bark at least) during funerals or laid on top of graves as a reminder of death merely being another part of the human journey to what happens after life.

Holly trees have many magical links as both Pagan and Christian lore speak of its associated symbolism for death and subsequent rebirth—particularly in winter and during the Winter Solstice since its famous bright red berries are in full bloom when the rest of the world appears to be dead.

The wood of the tree itself is special in its beauty as the grains are almost invisible and the wood is such a clear white that it resembles ivory. The wood is linked strongly with protection, thereby inspiring many holly spear shafts. If the cause of fighting was justified, it was believed a spear made of holly would be more balanced and travel more directly when thrown even if the spear thrower was not an amazing warrior.

The birch tree is related to a meaning that sounds very close to its name—birth. The link of new beginnings and birth that are tied to this tree is truly shown by the fact it can be a very strong agent for generalized love spells.

If strips of birch bark are gathered beneath the new moon, one can write a short spell requesting true love before burning it with specific love related incense or by casting it into a stream or other body of flowing water. Since the birch is for new beginnings though, the spell must not be said with a particular person in mind or it might corrupt or even turn the spell into a curse.

Hazel trees and their wood were the ultimate tool for all types of white magic. The wood could be used to gain wisdom, knowledge, and even inspiration in addition to being very useful in the healing arts. If one is outside, particularly at night, and needs magical protection in a hurry, the best way to form an area of safety is to draw a wide circle around yourself with a hazel branch.

Forked sticks of hazel make some of the most powerful dowsing rods as well—aiding in the search for water, minerals, or even buried treasure. The nuts of this tree (hazelnuts) can be strung up and hung along a doorway to request the help of fairies in your affairs.

Willow trees have many practical uses in the modern world. Their bark supplied the formula for pain relieving and fever reducing aspirin. An alternative name for the tree is even Witches’ Aspirin. Merely being in a grove of willow trees was thought to be a way to receive divine inspiration, skills, or even prophecies.

Priests, priestesses, and even artisans would sit under these trees (especially under the light of a full moon) to receive these gifts which were part of the atmosphere of the willow.

The longevity, size, and nutritious nature of its acorns combine to make the oak tree be considered as sacred to any culture who encounters them. It was considered to be the King of Trees. Also, the basic characteristics of the tree (strength and longevity) were considered to transfer to those who harnessed its power.

Oak acorns that were gathered at night were thought to have intense fertility powers—whether for a human or an entire field. Even the leaves of the oak had magical powers and a purpose. The burning of a few oak leaves and spreading around its smoke was the perfect way to cleanse the atmosphere of a particular place.