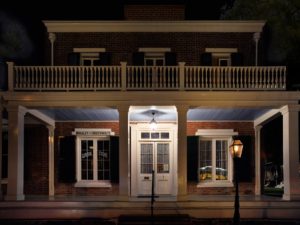 The Whaley House is one of the most haunted locations in the world. Take a look at some of the paranormal entities reported to haunt Old Town’s most famous house.

Designed and constructed by businessman Thomas Whaley, the beautiful two-story brick house has stood for more 150 years and served many purposes. It has been a general store, a commercial theater, and even a courtroom. In 1960, the building became a museum open to the public. However, the ghostly inhabitants are what make the house famous.

The Whaley House is just one of many California locations, such as the Queen Mary and Alcatraz, which are rumored to be notoriously haunted.

Many paranormal researchers believe the house is one of the most actively haunted locations in the United States. Given the history of the area – executions, mysterious deaths, and even disturbed burial grounds – it’s no wonder the place has a reputation for being haunted. If you’re lucky, you may just catch a ghost on your visit.

Here are a few of the entities you might encounter.

James “Yankee Jim” Robinson is the first known ghost reportedly to haunt the Whaley House. In 1852, the townspeople of San Diego executed Yankee Jim for attempting to steal a boat, hanging him from a makeshift gallows. He died on the very site where Thomas Whaley built the house just a few years later.

When construction on the new house was complete, the Whaley family moved in and claimed the dead convict’s ghost had taken up residence with them. They would hear Yankee Jim’s unearthly footsteps, heavy and ominous, pace the upper floor when no one should have been there.

Windows flew open and then closed by themselves. Thomas Whaley accepted the strange and unnerving manifestations as best he could. He would tell startled visitors, “Don’t worry, that’s just Yankee Jim.”

Even today, people claim to have encounters with the spirit of Yankee Jim, seeing his tormented apparition swinging on phantom gallows in the parlor. You can find Jim’s grave in the nearby El Campo Santo Cemetery.

Some members of the Whaley family still reside in the house even though they are long since dead and buried.

People occasionally see Thomas, the patriarch, walking through the house and smoking his pipe. Anna, his wife, sometimes rocks slowly in her chair or plays the piano.

Some visitors have only olfactory encounters with these ghosts, smelling Thomas’ pipe smoke or a woman’s lavender perfume – the same scent Anna wore.

Violet, the Whaley’s eldest daughter, reportedly committed suicide with a .32 caliber handgun. Quite a few people, however, believe someone else may have had a hand in her death.

Is it the ghost of Violet Whaley who makes the house lights flicker and then turn suddenly off? Does she send icy chills through visitors?

The Whaley family had a small dog, a fox terrier, whose name was Dolly. Many visitors to the house have reported seeing the ghost of a small terrier both in and around the house, both in the daytime and at night.

The truth about the Whaley house and the ghosts said to reside there remain mysteries that are likely to remain unsolved.

Most visitors to the Whaley House don’t have a paranormal experience, but a handful of people always come away as true believers. As one of the most reputedly haunted locations in the world, it is worth the trip for paranormal investigators for the experience alone.

The Mystery of the Hidden Entrance of Liyobaa Cave

A Message From Beyond The Grave