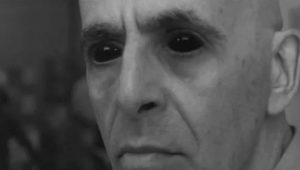 A woman named Jamie spoke about her strange experience of meeting a man with completely black eyes. This story was told in a podcast of November 29, 2018 on the paranormal site of Ground Zero Radio with Clyde Lewis.

“In 1998, I married a Mexican citizen and moved to his house, where his numerous relatives lived. Soon, we decided to go to the city of Matamoros with the help of my husband and his relatives to visit his elderly grandmother.

When we drove away from our house, I sat in the back seat of the car and just looked out the window.

And suddenly something seemed to ask me to look to the right and there, among a group of people standing at the curb, there was one man who was very different from the rest.

First of all, I caught the eye on his face, as it was very unusual. At first, it even seemed to me that he had no eyes at all, but instead large black hollows in the skull. But then I realized that he had eyes, but they were completely black.

And with those black eyes, the man was staring straight at me. He looked so up to the intersection until we turned off.

And then I suddenly felt very bad. So much so that we had to interrupt the trip. I remember that I was sitting and repeating everything to my husband, “I feel very sick, I feel sick.”

My husband’s relatives decided that I felt bad because of the warm weather, because I supposedly got used to the cold. The fact is that before the wedding I lived in Alaska for several years and then it was really difficult for me to adapt to the Mexican climate.

But I told them that I didn’t think it was because of the heat. It was just that something broke me and I even decided that I was dying. I began to ask to take me to the hospital, but my husband’s relatives decided to go back home with me. They brought me to the bedroom, closed the curtains and my husband’s mother laid me on the bed.

And then something happened that I would never have believed before.

My husband’s mother brought a raw egg and began to drive this egg through my body. I never believed in various superstitions and omens, but she had her own view of things.

The egg spattered her face and everything around, but the strangest thing is that five minutes later after that I suddenly felt better. All this was so incomprehensible to me, but I saw it with my own eyes.

When later I began to hear stories about children with black eyes, I immediately remembered that creepy person.”