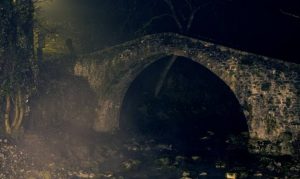 I have heard tell of a bridge in Amissville Virginia that is haunted. A form of this bridge has been around since before the Civil War.

My friends and I went to this bridge one night around nine or ten at night to see if it really was haunted. We heard tales of strange happens and decided that it would be fun to check it out. My one friend in particular, Rob. suggested it.

The bridge is near his house and he wanted to verify the reality of the alleged hauntings. Let me give you some background before I get into what happened that night.

After the Civil War and up to the present, other things have happened on the bridge. There was a motorcycle accident one night (where the person driving drowned) and a car accident another night. And it is said that if you drive across the bridge at midnight, your car will stop right in the middle of the bridge and everything will die and then at 12:01 your car will start back up. On to that night with my friends.

It was about nine o clock pm when we decided to venture up there. We had been at Rob’s party and he suggested that we all walk up to the bridge. Well, I didn’t know the area very well and didn’t feel comfortable with walking, so I said that myself and my bf would drive up and the rest could walk. Well, others had to leave early and decided to drive as well. We took two cars up to the bridge, five in each car.

When we got there, we had one big flashlight and one small one. We walked up to the end of the road and turned left, where the bridge was. It was not as I had thought it would be.

When I set one foot on it before, I had felt that something was not right with this bridge. Unlike when I was walking on the road, the bridge felt spooky and made me very uneasy. I then walked to the middle of the bridge to catch up with the rest of the group, but before I got there I felt icy hands around my neck, in a choke fashion. I freaked out and me and my bf, Tab. got off that bridge.

We didn’t go back on, but the rest of them did. After I was off the bridge for about two minutes, perhaps less, I heard them scream and saw their light go on. A few ran off the bridge, while others stayed on. The few that came off told me that they had heard a loud crash, silence, then another loud crash. They stayed with me.

There were a few more minutes of silence and darkness and then the rest of the group screamed, turned on their light, and ran off the bridge. Rob said that he had heard marching that sounded like a charge, and Kat had verified that she had heard it too.

Then Kat said that she had seen the whole motorcycle accident and apparently the guy had a popped tire and flew over the side of the bridge. She also said that someone had walked through her.

Now, before any of the others had run off the bridge, Tab and I had come off first. We were just coming off the bridge when I saw a flash of light in the woods. I went over to the edge of the road and looked closer and I swear I saw two men fighting in the woods. My mind could have been playing tricks with me, but I don’t believe so. I turned my flashlight on and the figures disappeared. Tab didn’t see anything, I know.

Well, we returned home, four in my car and six in the other.

We beat the other car back, because they went back to the bridge, walked up and down and then got into the car and drove around and back down to the bridge. They told us that apparently most of the goings on on the bridge are over the water. One of the girls saw a man dragging himself in the direction of the building.

When they got back finally, they got out of the car and started checking it. We asked what happened and they said that when they began to go down the driveway to Rob’s house, they heard a very loud thump that sounded like someone or something had hit the side of the car.

Think perhaps that the ghosts followed them home and were getting their revenge on them for stopping the car in the middle of the bridge? Who knows?