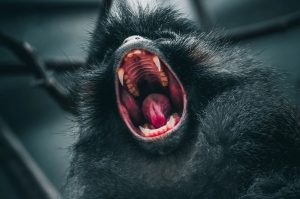 In Tanzania (East Africa), a flock of baboons carried out a brutal attack on a local village, kidnapping a small child and then killing him.

Local newspaper The Citizen reports that monkeys broke into the Tanzanian village of Mwamgongo in broad daylight in the afternoon last Saturday and climbed into the yard of local resident Shayima Saeed.

At that time, the woman was sitting at the door of the house and breastfeeding her one-month-old son, Lukhaiba. The baboons ran up to her and in an instant snatched the child from her arms and then dragged him away with them.

“She called for help and the villagers rushed to her house to help her pick up her baby from the monkey pack,” says Regional Police Commander James Manyama.

The villagers managed to track down the monkeys together, and then by force take away the child from them. During this, the baboons inflicted several serious wounds on the baby’s head and neck, which turned out to be fatal for the baby.

When the baby was finally in the hands of people, he was still alive, but soon died.

It is indicated that the village of Mwamgongo borders the Gombe National Park, so it is not uncommon for animals to invade villages. It is not clear why the baboons needed a human baby, but maybe they confused him with their cub.