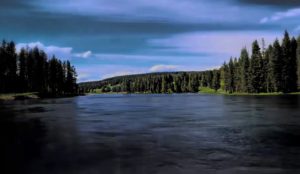 The Flathead Lake Monster is a cryptid, a creature whose existence is not proven, that is said to be located in Flathead Lake in Montana. Its appearance is very similar to that of the Loch Ness Monster, and the two have often been said to be the same type of creature.

Flathead Lake is on the southern tip of the Rocky Mountain Trench. It is located in northwest Montana and is the largest lake in the western United States, approximately 28 miles (50 km) long and 16 miles (25 km) wide, and 370.7 ft (113.0 m) in depth at its deepest point.

The monster is usually described as a large eel-shaped creature, round with a wavy body like a snake, that spans from twenty to forty feet. It is brownish to blue-black with grayish-black eyes. It has often been described as looking like a whale or a giant sturgeon – one of the oldest families of bony fish in existence, often found in lakes and rivers.

One other account described the beast as a giant eel-like creature that was very shiny and had a head shaped like a bowling ball. It has been reported to have many humps coming above the surface of the water when spotted, pointing toward the possibility that it is a creature similar to or the same as the Loch Ness Monster.

The first documented sighting of the Flathead Lake Monster was in 1889. James C. Kerr skippered the U.S. Grant, a lake steamboat that made its rounds in Lake Flathead. On one trip Kerr and his passengers saw what first appeared to be a log or another approaching boat in the water.

After coming closer, they realized an unusually large whale-like object was coming toward them in the lake. Frightened, one of the passengers on the steamer pulled out the rifle that he was carrying. He did not kill the creature, but this sighting started the legend of the Flathead Lake Monster.

There have been many sightings since, most often reported to have occurred between April and September. One of the strangest accounts was that of a researcher who claimed he had sighted the lake monster in 1985 and again two years later. This is very unusual because it is very rare to see it even once in a lifetime.

The average number of sightings is between one and two each year. However, in 1993 alone, there were about thirteen reports. It was clear that weather and lake conditions were not unusual in 1993. However, on May 24, 1993, there was a sighting reported of two monsters together in Big Arm Bay. One was considerably larger than the other and they were thought to possibly be mother and child, or a male and female couple. On July 15, 1993, two sightings occurred, 25 minutes and 15 miles apart. On July 17, 1993, two sightings were made in the same area, but half a day apart.

Moreover, on July 13, 1993, off Woods Bay, a bank officer and a district sales manager from Seattle managed to acquire a few seconds of video footage of the monster. The video shows a large, dark shape about 12 feet long just below the surface. One witness stated that he was able to see the monster before the film started rolling and that it had a sturgeon-like head and an eel-like body.

There have been more sightings of the monster than this, but the year 1993 proved to be a very significant year in hunting the Flathead Lake Monster.

Because of the sightings of two creatures at the same time and the multiple sightings at different locations within a short time, there are theories that there are two different monsters.

However, an alternative explanation is that one of the more common fish in the lake, such as a sturgeon, is being mistaken for the monster and that is why multiple people are seeing it. Perhaps the year 1993 was a more common year to spot sturgeons in the lake, and therefore the monster was much more prevalent.