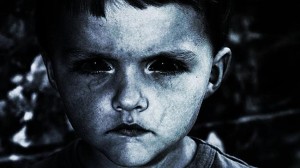 The Black Eyed Children, also known as Black-Eyed Kids, allegedly constitute a paranormal phenomenon. They are said to “eerily” resemble children from 7 to 16 years in age. They are reported to look like normal children apart from their pale white skin and pitch-black eyes.

The children often wear black “hoodies” that are zipped up all the way with the hoods pulled completely onto their heads, but they are most consistently reported to be clad in plain dark garments whilst occasionally showing up shoeless.

The children seem to give off an eerie aura of menace merely by their very presence. Witnesses report feelings of fear, anguish and despair when approached. The children are described as being mostly devoid of personality and even robotic in their behavior. They are sometimes allegedly perceived to be floating or hovering just a few inches above the ground.

Other accounts endow them with superhuman speed because of their reported ability to appear on the road several miles ahead of a vehicle that had previously passed them by.

Witnesses have further claimed that they cannot enter into anyone’s personal space without express permission. Some reports have speculated on the presence of telepathic powers. And a small number of witnesses have reportedly met with terrible accidents on the heels of their encounters.

Sightings occur with a fair amount of regularity and are sometimes closely related. In most cases the witness encounters one or two children ranging from 7-16 years of age approaching his house or his car.

In a few instances the children have walked out into the road to stop a car and ask the driver for permission to use his portable telephone.

They usually ask for help from people, for example asking for money for food or a movie, or for permission to call their parents from the helper’s telephone. They have also been recorded to ask for shelter.

In 2014, sightings of a child with black eyes began happening in the Staffordshire area of England. Descriptions of the child are said to be identical to those chronicled in the early 1980s. Unlike most sightings of BEKs, these sightings always happen in broad daylight.

Brian Bethel is a respected veteran journalist and current columnist for the Abilene Reporter-News. In the ’90s, Brian wrote a blog piece detailing an experience that would soon come to be shared by many others.

His story is unique in that it was the first, and it was told by someone with an eye for journalistic detail and absolutely nothing to gain (and a career to lose) by spinning such an implausible yarn.

One evening as Brian sat parked outside the local movie theater, filling out a check for the night deposit next door, his drivers’ side was approached by a couple of children, no more than 10 or 12.

Brian rolled down his window, expecting a request for money. Only one of the boys spoke, but even before any words came out of his mouth, Brian was gripped by fear.

An irrational, heart-pounding fear that he couldn’t explain.

The boy told a story: They wanted to see the movie, they’d left their money at home, and could Brian give them a ride? Brian tried to avoid looking at them, not wanting his fear to show; he noticed that the last showing of the movie had already begun.

The little boy implored: They were just a couple of kids. They didn’t have a gun. As Brian finally locked eyes with the boy, his mind went wild with horror. Both the kids’ eyes were coal black.

Stammering an excuse, he began to roll up his window and put the car into gear, as the little boy called out angrily “We can’t come in unless you say it’s okay! Let us in!”Brian burned rubber all the way home and wrote about the experience later that night.

Apparently, he’s far from the only one—stories abound on the Web about black-eyed people, usually children but sometimes adults, with similar requests, who cause unexplained panic in all who encounter them.

Perhaps it’s just those eyes, or the odd, somewhat alien nature of their speech—or the malevolent, predatory nature that those who encounter them can feel lurking just beneath the surface.

No one has stuck around long enough to find out just who or what they really are. Perhaps you’ll find out some dark night, on some side street as you’re walking alone. Let us know, will you?