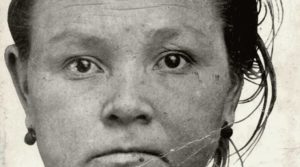 Jeanne Weber was a French serial killer, who strangled at least 10 children, including her own. She was both convicted of murder and declared insane in 1908 and hanged herself two years later.

Born in a small fishing village in northern France on the 7th of October 1874 , Weber left home for Paris at the age of 14, working various menial jobs until her marriage in 1893. Her husband however was an alcoholic, and two of their three children died in 1905.

By then, Jeanne Weber was herself drinking heavily, residing in a seedy Paris tenement with her spouse and her seven year old son. On 2 March 1905, Weber was babysitting for her sister-in-law, when one of the woman’s two daughters,18 month-old Georgette suddenly “fell ill” and died.

Strange bruises on her neck were ignored by the examining physician, and Weber was welcomed back to babysit on 11 March. Two-year-old Suzanne did not survive the visit, but a doctor blamed the second death on unexplained “convulsions.”

When babysitting for her brother, on 25 March, his daughter, seven-year-old Germaine, suffered a sudden attack of “choking,” complete with red marks on her throat. The child however survived that episode, but she was less fortunate the following day, when Weber returned and killed her.

Diphtheria was blamed for her death, and for that of Weber’s son, Marcel, just four days later. Once again, the tell-tale marks of strangulation were ignored.

On April 5th 1905, Weber invited two of her sisters-in-law’s to dinner, and remained home with her 10-year-old nephew Maurice while the other women went out shopping. They returned prematurely, to find Maurice gasping on the bed, his throat mottled with bruises, Jeanne standing over him with a crazed expression on her face.

Charges were filed, and Weber’s trial opened on 29 January 1906, with the prosecution alleging eight murders, including all three of Weber’s own children and two others, Lucie Aleandre and Marcel Poyatos, who had also both died while in her care, and it was further alleged that Weber killed her son in March in order to deflect suspicion off herself.

Weber was however being defended by the brilliant defence lawyer Henri-Robert, and jurors were reluctant to believe the worst about a grieving mother. She was acquitted on 6 February. Fourteen months later, on 7 April 1907, a physician from the town of Villedieu was summoned to the home of a peasant named Bavouzet.

He was greeted at the door by a babysitter, “Madame Moulinet,” who led him to the cot where nine-year-old Auguste Bavouzet lay dead, his throat badly bruised. The cause of death was listed as “convulsions,” but the doctor changed his opinion on 4 May, when “Madame Moulinet” was identified as Jeanne Weber. Weber engaged the lawyer Henri-Robert once more. Held over for trial, Weber was released in December, after a second autopsy blamed the boy’s death on typhoid.

Weber quickly dropped from sight, surfacing next as an orderly at a children’s hospital in Faucombault, moving on from there to the Children’s Home in Orgeville, run by friends who sought to “make up for the wrongs that justice has inflicted upon an innocent woman.” Working as “Marie Lemoine,” Weber had been only been employed in the job for less than a week when she was caught strangling a child in the home.

The owners quietly dismissed her and the incident was covered up. Back in Paris, Weber was arrested for vagrancy and briefly confined to the asylum at Nanterre, but doctors there pronounced her sane and set her free.

She drifted into prostitution, picking up a common-law husband along the way. On May 8th 1908, the couple settled at an inn in Commercy. A short time later, Weber was found strangling the innkeeper’s son, 10-year-old Marcel Poirot, with a bloody handkerchief. The father had to punch her three times in the face before she would release the lifeless body. Jeanne Weber’s real name only became known after she had been arrested and placed in a cell. The authorities made quick haste to bring her to trial as soon as possible.

Held for trial on murder charges, Weber was declared insane on October 25th 1908, and sent to the asylum at Mareville. Credited with at least ten murders, she only survived two years in captivity before hanging herself in her cell on the 5th July 1910 at the age of 35.

Catherine Wilson – Serial Killer Hanged In Front of a Crowd of 20,000