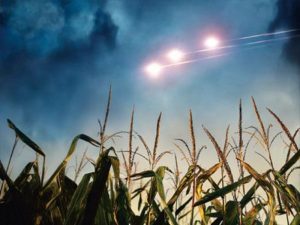 The Stephenville Lights was a UFO event that took place at the little dairy town of Stephenville, Texas, population 16,715.. Starting January 8, 2008, reports of UFO sightings in the Stephenville area began pouring in. Soon the small town was caught up in what can only be called UFO frenzy.

News crews from major news outlets arrived some as far away as Japan to cover the event Local teenagers had started running around wearing helmets made out of aluminum foil, and even the adults had taken to wearing novelty T-shirts announcing Stephenville as “The Alien Capital of the World.”

By most accounts the flap started when Steve Allen, a pilot and owner of a local freight company, witnessed a UFO along with a group of his friends that was a mile long and one-half mile wide in the skies above Stephenville.

Allen described the object as several flashing strobes that made several changes in flash patterns and configurations. He stated that the initial event lasted about three minutes or when two vertical flames appeared then the craft was gone.

To Allen’s astonishment after about 10 minutes the object appeared again this time pursued by two Air Force jets. Allen said he observed the spectacle until the group disappeared into the distance heading east in the direction of South Fort Worth, Texas.

During this second appearance Constable, Lee Roy Gaitan, was outdoors and witnessed the display. Gaitan’s matched Allen’s except in one regard. Gaitan reports that initially he briefly saw a very large red at about 500 yards away before seeing the strobes flashing in the distance.

Initially, Gaitan kept quiet until others in town spoke up about having seen this strange sight. Then he spoke up as well. Gaitan was understandably hesitant to tell anyone he witness a UFO since he was about to be up for re-election.

As it turned out several dozen Stephenville residents had seen a variety of strange objects in the sky, and all seemed relieved when their neighbors and the town’s officials came forward and admitted to having seen it as well.

A mechanic named Ricky Sorrels, claimed seen a large, flat, metallic object in a pasture behind his home in the nearby Dublin area. He watched as it hovered roughly 300 feet above the ground before lifting into the sky and disappearing from view.

A police officer that wished to remain unidentified reported to Constable Gaitan that he had seen a large cigar shape craft approximately 300 yards long. He further described the craft as having two antennas on top that ended in red lights.

With reports pouring in, Stephenville officials wasted no time contacting Carswell Air Force Base located approximately 60 miles away. Initially the military said they had no aircraft in the skies near Stephenville on the night in question.

Initially the official word from the U. S. Air Force was the people of Stephenville had seen nothing more than the reflections from commercial airliners flying over the area that evening. Later, however, they said that a group of ten F-16 Fighting Falcon jets had in fact been performing night-training maneuvers in the area.

They claimed there was an “error” in the initial documentation due to an internal miscommunication between Base offices. They released an official statement saying, “In the interest of public awareness, Air Force Reserve Command Public Affairs realized an error was made regarding the reported training activity of military aircraft.”

The Mutual UFO Network (MUFON) compiled a 77-page report on the Stephenville sighting. The report was titled, “Special Research Report Stephenville, Texas”. The extensive report analyzed radar and data transmissions from the Federal Aviation Administration and the National Weather Service regarding the event. The Mutual UFO Network was able to obtain these records via the Freedom of Information Act, after numerous requests, and compared the official reports to eyewitness accounts.

According to MUFON the radar data recorded by the Federal Aviation Administration on the night of January 8 did indeed confirm a UFO in the area of Stephenville, Texas that night. It was heading in the direction of then-President George W. Bush’s home, the Prairie Chapel Ranch located in Crawford, Texas.

It was also discovered by the Mutual UFO Network that the F-6 fighter jets dispatched by Carswell Air Force Base had in fact come to within a mile of the UFO and that it traveled at speeds varying from 49 miles per hour to nearly 2,100 miles per hour.

As with most UFO sightings we are left with more questions than answers. The government, in this case represented by the U. S. Air Force, gave several different answers over a period of time. Some of the witnesses are likely copycats looking to garner attention. Maybe it was flares like the skeptics claim. Except, why would flares need antennas with red lights like the police officer described?