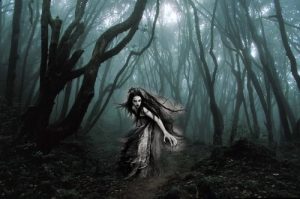 Banshees, according to Celtic lore and accounts, are female portents of death attached to clans in Wales, Scotland, and Ireland. Are these entities ghosts?

According to the Celts, Banshees have different appearances. They can be beautiful young long-haired women wearing green dresses and grey cloaks, matrons garbed in white or red or crones wearing grey hooded cloaks, sheets or grave robes or variations.

There are legends, and accounts, that banshees can shapeshift into animals. The Irish have Bean sidhe, the Scots, Ban sith and the Welsh, Gwrach y rhibyn.

This account was published in Memoirs of Lady Fanshawe. In 1692, Sir Richard, her husband, and she were overnight guests at the O’Brien’s castle, which was surrounded by a moat. At midnight, an unearthly keening woke her. She looked out the window and saw a woman with disheveled reddish hair, clothed in ancient Irish dress. The entity keened for a while before disappearing.

In the morning, Fanshawe told her host what happened. He said a close relative died that morning. He said a close relative died in the castle during the night. He told her the banshee always appeared before a death in the family. One of his ancestors married a peasant, bringing disgrace to his family, so he drowned her in the moat to restore respect. The family believed she was the woman’s ghost.

Here are selected accounts of the Celtic death omen:

– Mr. Lewin was away from home on business in 1776. His daughter, Jane, and her companions visited a friend. As the group returned home in clear moonlight, they were startled by loud keening coming from the direction of an old church’s ruins. All saw an old woman with long white hair, wearing a black cloak, running back and forth on the top of a wall, clapping her hands. As they drew close to her, she vanished. The extremely frightened group hurried away. Mrs. Lewin was more upset than they were. She had been sitting by the window when a huge raven flapped at the glass three times. While she related this to the group, the bird flew against the window again. Several days later, they learned Lewin suddenly died on the night of the incidents.

– The Westropps’ banshee death omen appeared in the form of a white owl. When John Westropp died the family and servants heard its keening.

– On the night Mrs. Stamer died in January, 1883, the banshee’s keening and sounds of a death coach were heard.

– When Dr. MacNamara died, his family and others heard a banshee. The locals believed there were several banshees and that one sat near the crossroads leading to the workhouse and foretold the deaths of the inmates.

Was the Hohenzollern’s White Lady a Banshee?

Her appearance was an omen of impending tragedy for the Hohenzollern dynasty for centuries in this well documented case. Who was she in life? The House of Hohenzollern was a wealthy, powerful dynasty that ruled Prussia, Romania and Germany in the Holy Roman Empire for four hundred years.

Elector John Sigismund died the next day. She was seen many times throughout the centuries and presage tragedy for the dynasty. The last reported sighting of the White Lady was in 1914, immediately prior to the assassination of Archduke Franz Ferdinand which triggered World War I.

The last publicly reported sighting of the White Lady was in 1914, immediately preceding the assassination of Archduke Franz Ferdinand which triggered World War I.

Like the banshee, there are many accounts and lore about the corpse lights death omens. In the 500s, death could come unexpectedly. According to legend, David, Wales’ patron saint, prayed for an omen. His vision revealed death would be presaged by lights.

In Wales, they’re called canyll corfe. They bob over the land, stopping at places where death is imminent. A small pale or bluish corpse candle foretells the death of a baby; a big one, death of an adult.

Multiple candles divulge the number of people soon to die. Colors vary: red for men, pale blue for women, pale yellow or blue for children. When the lights are approached, they disappear. Some people believe these are a form of ghosts.

Are banshees lore or a type of apparitions, intelligent ghost who foretell death? There are too many witnesses’ accounts of the entities to dismiss them as mere myths.

Maybe some day, there will be hard evidence of their existence. Perhaps, Shakespeare’s Hamlet’s statement about there being more things in the universe than philosophy can envision to Horatio is reality.