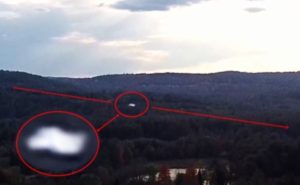 “Fastwalker” is a term used by NORAD and branches of armed forces to describe unidentified aerial phenomena moving and/or changing directions at high speed far beyond what current aerospace technology is capable of.

These mysterious Fastwalkers have only been spotted in recent years and mainly captured by amateur drones from around the world, reports ufosightingshotspot.blogspot.com.

Now, on October 4, 2020 such a Fastwalker has been caught by a drone while flying at approximately 200′ in altitude, moving very fast and in a straight line from South to North direction over Milford, New Hampshire.

What are these objects flying through our atmosphere with such incredible speed that they cannot be seen with the naked eye?

The video starts with the UFO Fastwalker in real-time, each subsequent clip slowed more than the previous.