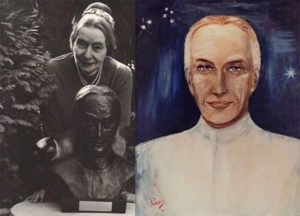 Elizabeth Klarer was a South African woman who claimed to have been contacted by aliens multiple times between 1954 and 1963. Klarer’s first visitation would have occurred around seven years old and she was one of the first women to claim a sexual relationship with an extraterrestrial.

She promoted an ideal of a better world and beliefs in a cosmic consciousness. In her book Beyond the Light Barrier, she strived to convey a message of peace, love, understanding and environmentalism, which she credited to the superior wisdom of an advanced and immaculately utopian Venusian civilization.

She promoted conspiracy theories of an international cover-up which would essentially keep vital information from the public, and claimed to have been threatened with abduction to press her into revealing details about alien technology.

How it all began

Elizabeth was born in 1910 at Mooi River, Natal, as the youngest daughter of SB and Florence Woollatt.

At age seven, Elizabeth and her older sister Barbara had their first supposed UFO encounter. While feeding their Sealyham puppies outside the farmhouse Elizabeth and her sister claimed that they witnessed a silver disc bathed in a pearly luster which swooped over them.

Simultaneously a giant, orange-red and cratered planetoid was observed orbiting and rotating high in the atmosphere. The disc would have rushed to meet it, pacing and guiding it northwards, while the planetoid left a smoke trail in its wake.

Only months later she would have had another sighting in the company of Ladam, their Zulu farm manager. Ladam interpreted the sighting in terms of Zulu mythology. Elizabeth sometimes alluded to an even earlier sighting, at age three in 1913/14.

Elizabeth matriculated from St. Anne’s Diocesan College in Pietermaritzburg, and moved to Florence, Italy, to study art and music. Thereafter she completed a four-year diploma in meteorology at Girton College, Cambridge, and was taught by her first husband to fly a Tiger Moth light aircraft.

In 1932 the three Woollatt sisters and Maureen Taylor formed the Connington polo team and drew a match against the Durban ladies’ team, which is seen as the first officially recorded ladies’ match in South Africa.

During a 1937 flight from Durban to Baragwanath in a Leopard Moth aircraft, she and her husband would have seen a saucer which approached, coasted along, and then departed from them. During World War II she held a responsible position in RAF Intelligence.

She believed in telepathic powers, and tried to enhance these abilities since her youth.

In 1954, her sister May, then resident on the farm Whyteleafe in the Natal midlands, relayed to her that the native Zulu people were reporting appearances of the lightning bird in the sky. In response Elizabeth and her children travelled from Johannesburg to the farm, and she ascended Flying Saucer Hill the following day, December 27.

There she claimed to have seen the star ship descend and hover three metres above ground, while only emitting a soft hum. Its hull was spinning, though its central dome remained stationary. The spaceman who would later identify himself as Akon was clearly visible through one of three portholes. A barrier of heat emanating from the ship would have prevented her from approaching however, and his scout ship departed again.

Some 18 months later, she would visit the hilltop again, after further reports of the lightning bird. On this occasion, on 7 April 1956, Akon would have taken her aboard his scout ship,a craft some 60 feet (18 m) in diameter.

Once inside, she would have met a second pilot, stocky and darker-skinned than Akon, who was supposedly a foremost botanist, besides astrophysicist, by profession. She was allegedly shown a lens which offered views of earth and people through the craft’s floor.

With only a hum emanating from below and no sense of movement, they would have been transported to the enormous cigar-shaped mother ship which had a garden-like interior. After meeting its inhabitants, she would have been returned to the hilltop, a similar arrangement as that made between Adamski and Orthon in 1952.

During the encounter kisses were exchanged and Akon revealed that Elizabeth was in fact a reincarnated Venusian, and long-lost soulmate. He further explained that they would infrequently take earth women as partners, as the offspring would strengthen their race with an infusion of new blood. He also claimed that a number of Venusians were surreptitiously living among people.

From 17:45 on the 30th of April 1956, various independent observers noted a steady red glow poised at a rocky section of the hill, which remained there until 2:00 in the morning. No sign of a fire could be found afterwards.

On July 17, 1956, after their family farm was sold, she made a subsequent visit to the area, and claimed to have taken a series of 7 photos of Akon’s scout ship using her sister’s (or daughter’s) simple Brownie box camera.

Vivid light flashes would have turned into a dull grey craft enveloped in a shimmering heat haze. For all of an hour the disc would have darted silently over a rise near the farmhouse, making several weaving detours, and it would have shone silvery in bright sunlight before streaking away out of sight.

Edgar Sievers, a ufologist from Pretoria, stated that her family saw her leave the homestead alone, and suggested that the frail Elizabeth would have found it difficult to throw a car hubcap and photograph it at the same time. He also stated that no make of hubcap had been illustrated to sufficiently resemble the disc in the photos. 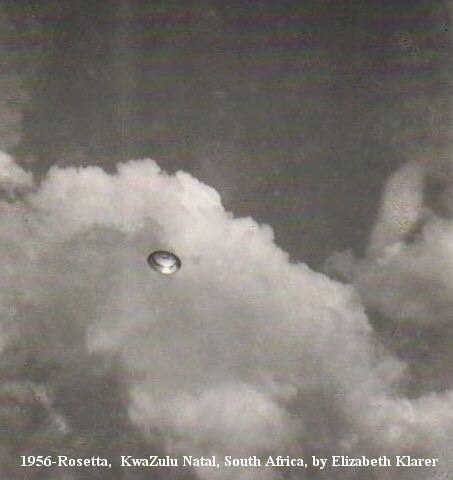 In April 1958 a series of contacts would have started which would set her story apart from the 1950s standard. These visits by Akon would have culminated in a day-long rendezvous with Elizabeth on the high plateau of Cathkin Peak, where he supposedly presented her with a silver ring which enhanced their telepathic connection. Their love was then consummated and a child was conceived at her advanced age of 48 years.

“I surrendered in ecstasy to the magic of his love making, our bodies merging in magnetic union as the divine essence of our spirits became one”, claimed Elizabeth.

After a terrestrial pregnancy she (with her MG car) would have been transported in 1959 to Akon’s home planet, Meton, supposedly orbiting Proxima Centauri in the nearby multiple-star system Alpha Centauri. There she would have delivered the male child.

Her son, Ayling, stayed behind on Meton to be educated, while Elizabeth reluctantly came home. Meton’s planetary vibrations affected her heart, and she was consequently not permitted to return there, instead receiving follow-up visits from Akon and Ayling.

“There were no cities or skyscrapers as Earth people know them anywhere on Meton. Homes were scattered in park-like grounds… There was an abundance of all things needed by civilization – food, water and all materials for building, an unlimited supply of energy on tap from the atmosphere and the Universe, no shortages of any kind and no monetary system at all”, said Elizabeth. 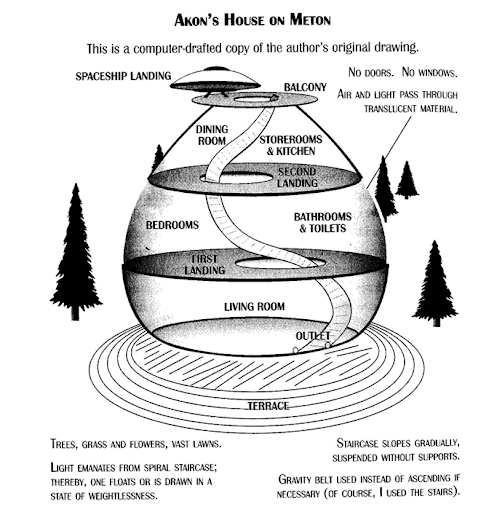 Klarer took far more time before publishing a book, Beyond the Light Barrier (1980), about her extraterrestrial adventures. On his world lecture tour in the late 1950s, George Adamski made a point of visiting South Africa and looking up Klarer for a chat on their variety of experiences with the friendly, wise “space brothers.” By that time, Klarer was not the only Adamski follower to experience claimed space-motherhood.

After her sister and brother-in-law died, Elizabeth returned from Natal to Johannesburg. There she worked for a time in a CNA book store, but found city life stifling. From the 1950s onwards her outlandish claims made her a darling of the press, who also loved to ridicule her.

She welcomed any press however, as the dissemination of Akon’s message was paramount – a life-task of extreme importance. The account of her observations and contact experience in Flying Saucer Review of Nov-Dec 1956 was noticed by Edith Nicolaisen.

Nicolaisen’s correspondence with Elizabeth consists of 23 letters, written from 1956 to 1976. She published the Klarer story in the small booklet I rymdskepp över Drakensberg in 1959, and a second edition appeared in 1967.

From about 1960 to 1966 Elizabeth worked on the manuscript for her book, which now included the Akon love saga, as she couldn’t “hide the truth in these matters.”

In 1968 Elizabeth agreed to be interviewed by ufologist Cynthia Hind, and Hind’s write-up of her story appeared in Fate magazine of August that year. Ufologist Kitty Smith established contact with Elizabeth after reading about her in Outspan magazine, and claimed her own sighting of Akon’s ship in January 1984.

When another South African, Ann Grevler, claimed alien contact in the late 1950s, Elizabeth was outspoken and issued various challenges to her to defend her statements in an open forum. Likewise she denounced Philipp Human’s supposed contact through a trance medium, and this caused a rift between them.

In her view the space people would never stoop to such methods. In 1975 she was invited by Hermann Oberth to attend the 11th International Congress of UFO Research Groups in Wiesbaden, Germany. She delivered an address there on 2 November, for which she received a standing ovation. In May 1992 Smith arranged a talk by Klarer at the Unidentified Flying Object Club in Pietermaritzburg. This was so popular that the crowd grew too large to cope with.

Elizabeth faithfully commemorated the April 7th anniversary of her union with Akon by returning to Flying Saucer Hill. On one occasion she befriended SAAF helicopter pilots who sought shelter on the farm during a storm, and they facilitated visits to the hill when a ride on horseback became too difficult for her.

Her third husband Aubrey Fielding died in 1981 and his ashes were strewn on the hill. Elizabeth died of breast cancer at age 84,leaving her second book The Gravity File unfinished.

The book would have filled in the gaps of the first, besides elucidating the military and political aspects of UFO research, and explaining Akon’s “electro-gravity propulsion” technology. Before her death she related to acquaintances that Ayling (like Akon) was now an astrophysicist, who was crisscrossing the universe with his father, his space woman Clea, and their son.