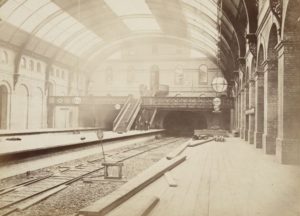 During the early 1990s the managers of the London Underground were forced to conduct an investigation into a series of unusual events on a stretch of the Circle Line, between Edgware Road and Baker Street following a number of complaints from worried staff and commuters.

According to reports, trains would frequently breakdown and lose all electrical power on the line between the two stations, plunging hapless travellers in to total darkness. The breakdowns were taking place on such a regular basis that the operators became convinced there was a major fault effecting this section of the track.

The Circle Line is the oldest underground railway line in the world. The origins of the track between Edgware Road and Baker Street can be traced back to 1863. At this time open-roofed underground carriages were built from wood and powered by steam.

Between 1900 and 1918, the Circle Line was gradually electrified and since then, the line underwent countless modifications and improvements. When the major breakdowns started taking place in the 1990s, the management sent a teams of electrical engineering experts to diagnose and resolve the problem.

Unfortunately, for the first time in the track’s 120 year history, the engineers were unable to ascertain what was at fault.

The management of the London Underground became increasingly frustrated by the situation and decided to gather as much information on the stretch of track and breakdowns as possible.

Hoping that passengers might be able to offer-up clues, they put out a request to customers, asking them to provide any information they had on the breakdowns. The response was limited, but astonishing.

The management had hoped that commuters would offer eyewitness clues to help solve the problem (ie noticing smoke or sparks before the electrical failure). Instead, most of the responses talked about the effect the breakdowns appeared to have on fellow passengers, whilst several suggested paranormal activity.

One of the commuters who provided information to the London Underground operators, stated that she had been making the same journey between Paddington and Farringdon for 15 years and had noticed something was wrong with the Circle Line long before the major power failures started happening.

She alleged that during those 15 years, she had witnessed countless passengers suffering panic attacks or “emotional episodes” always shortly after her train had left Baker Street.

She went on to explain that when the major electrical failures started taking place, the incidents of panic or emotional upset seemed to increase sharply. She concluded that something “atmospheric” or “otherworldly” must be causing the problem.

A different passenger offered up equally bizarre information in his response. He had been caught in a particularly lengthy breakdown, during which his carriage and other carriages experienced lighting failure.

In a bizarre account, the man explained that shortly after the train broke down, he and other passengers had become aware of several figures standing outside their carriage, next to the tracks. Several other reports seemed to describe the same incident.

The management of the London Underground was shocked by the reports they received, but this was literally just the start of the weirdness.

At the same time they undertook the survey of passengers, they instructed a team of staff to go back through the records of engineering and maintenance work and record any potentially relevant data.

Thanks to the efforts of the management’s Victorian forebears, accurate records went back to 1863. As many sections of the London Underground were located in historically significant areas, staff were required to record any archaeological finds made during digging.

Consistently between 1863 and 1990, workers had recorded finding large numbers of bone fragments and teeth between Baker Street and Edgware Road. Indeed, so many were found when the track was first developed between 1863 and 1918, that the area was briefly nicknamed the “plague pit” in official reports.

Stunned by the evidence they had received from passengers, staff, and records, the London Underground management team approached the British Museum for advice and information.

Academics at the museum were able to confirm that the area between Baker Street and Edgware Road was the suspected site of a very large medieval plague pit, thought to have been the final resting place of up to 20,000 anonymous souls.

The coincidence of information and evidence prompted the management team to have the stretch of track between the two stations blessed and sprinkled with holy water.

They also replaced all electrical cabling for the second time in a year and requested all workers to behave respectfully and avoid swearing/blasphemy in the area. Miraculously, after these steps were taken, the problem disappeared and has not subsequently resurfaced.