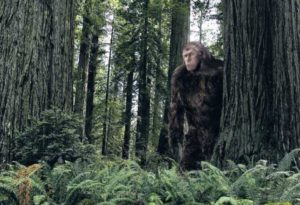 To date, the phenomenon of Bigfoot has hardly been studied. There is no real evidence of the existence of the forest monster, but reports from frightened eyewitnesses regularly come from different parts of the earth.

In the southwest of Russia, near the city of Adygeisk, local residents filmed a video that, according to them, proves the existence of Bigfoot.

The video shows how something dark moves very quickly, as if trying to hide from people. Eyewitnesses at first thought it was a bear, but then it became clear that it was something completely different.

“We thought it was a bear, but we saw that this creature was running on two legs. It moved very quickly”, claimed the author of the video for the Russian media.

“We were shocked by what we saw. This creature was huge, maybe 8-9 ft. Nobody would have believed us if we hadn’t filmed everything.”

Recently, a team of researchers from the Texas DNA Laboratory have come up with some pretty interesting results.

They examined specimens found in Canada and the United States that could belong to a mysterious cryptid, including saliva, blood, skin and hair of the Yeti, and found that this creature could be a hybrid of a person and a certain creature unknown to science.

To a greater extent, the creature can be attributed to primates. Researchers believe that the crossing of the species took place about 15 thousand years ago.