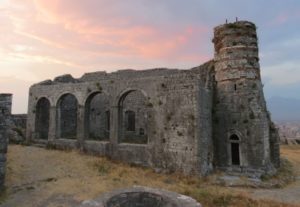 Rozafa is the castle near the city of Shkodër, in northwestern Albania. It rises imposingly on a rocky hill, 130 metres (430 ft) above sea level, surrounded by the Buna and Drin rivers.

Shkodër is the seat of Shkodër County, and is one of Albania’s oldest and most historic towns, as well as an important cultural and economic centre.

There is a famous legend among Albanians associated with the construction of the Rozafa Castle, which has been transmitted orally from ancient times.

The story tells about the initiative of three brothers who set down to build a castle. They worked all day, but the foundation walls fell down at night.

They met a wise old man who seems to know the solution of the problem asking them if they were married. When the three brothers responded positively, the old man said:

“If you really want to finish the castle, you must swear never to tell your wives what I am going to tell you now. The wife who brings you your food tomorrow you must bury alive in the wall of the castle. Only then will the foundations stay put and last forever”.

Three brothers promised not to talk with their wives about what had happened. So they agreed that whichever of their wives was the one to bring them lunch the next day was the one who would be buried in the wall of the castle.

The two older brothers, however, defied that promise and explained the situation to their wives that night, while the honest youngest brother said nothing at all about it to his wife.

The mother of the three brothers knew nothing of their agreement, and while the next afternoon at lunch time, she asked her daughters-in-law to bring lunch to the workers, two of them refused with an excuse.

The brothers waited anxiously to see which wife was carrying the basket of food. It was Rozafa, the wife of the youngest brother, who left her younger son at home.

Embittered, the youngest brother explained to her what the deal was, that she was to be sacrificed and buried in the wall of the castle so that they could finish building it, and she didn’t protest but, worried about her infant son, she accepted being immured and made a request:

The faithfulness of the youngest brother and the life sacrifice of his young wife are portrayed as elements of symbolic importance. It is said that milk still flows from one of the walls in the castle.